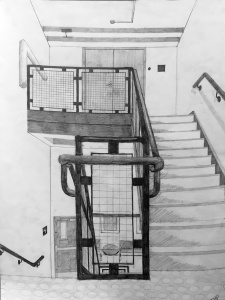 This was the second time Phaneuf’s artwork was selected for Art in the House and her second time traveling to Lansing to see her piece.

“Traveling to Lansing for the reception and getting to see it on display was exciting,” she said. “It's always an honor to be recognized in such a way, and I'm grateful not only to the program but also to the university for the opportunity.”

Phaneuf’s piece—titled “Stairwell”—is a realistic representation of one of the stairwells on campus. “My style is normally much more natural and organic, so drawing the straight lines and angles of a building was stepping a little bit outside of the box for me,” she said. 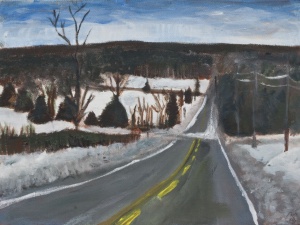 Phaneuf never intended to take a second trip to Lansing, or for her artwork to be displayed at the House again. “Honestly, I didn't submit my piece for consideration, but my professor, Julie Lambert, chose it to be juried into the program,” she said.

Seacord recently traveled to Brighton and heard about the peak. “A friend told it me that it was the highest peak around,” she said. “Coming down the hill is beautiful, and I couldn't help but paint it.”

Both pieces will be on display for one year in Lansing’s Anderson House Office Building. 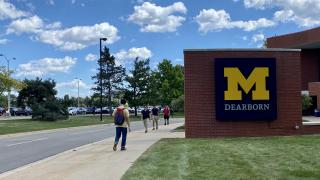