A 48-hour rite of passage 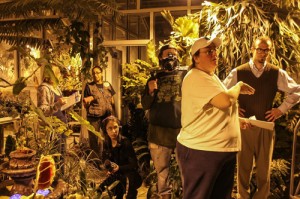 They edited hours of audio files.

And some students even caught a few hours of shuteye.

“They think it’s my just sadistic pleasure, but it’s become somewhat of a rite of passage,” said Gilmore, a clinical associate professor of journalism and screen studies at University of Michigan-Dearborn. “They all know about it and are terrified of it, but they all want to do it.”

Since 2008, Gilmore has asked his Advanced Media Production students to recreate scenes from popular films in a mere two days. This year, Gilmore selected a scene from the musical “Little Shop of Horrors.”

On March 7, Gilmore provided his students with the script, which was a mystery to everyone but him. Over the next two days, students had to recreate the four-minute scene on camera. That meant scouting shoot locations, recording and editing audio and video, finding costumes and any other tasks necessary to recreate the popular 1986 film featuring Rick Moranis and Steve Martin.

“This is really their one chance to get a taste of what it’s like to work in the film industry,” Gilmore said. “The reality is that the turnaround on films is very quick and you don’t have a ton of time to figure things out. It’s one endless problem after another, but they love it.”

The class was split into two groups, one of which was led by UM-Dearborn junior Deb Tackett. As director, Tackett had a wealth of responsibilities to ensure their scenes best represented the film.

Tackett quickly learned that everything doesn’t always go as planned during the production process. Her team expected to record scenes in the university’s greenhouse the evening of March 8, but the lights went out around 8 p.m.

She had to react quickly, so they lit up the dark greenhouse using high-pressure sodium lights and began recording.

“You don’t know what you have inside you until something goes wrong,” said Tackett, a nontraditional student majoring in journalism and screen studies. “This project forces you to use all of your skills. It definitely made me think twice about what it takes to actually make a film. You appreciate them a whole lot more.”

Both teams had to submit their videos to Gilmore the afternoon of March 9, but he did allow students to make additional edits after deadline.

“It’s a wonderful thing to watch because they’re constantly moving, and by the end of it, they just crash,” Gilmore said. “This is really what the industry’s like.”