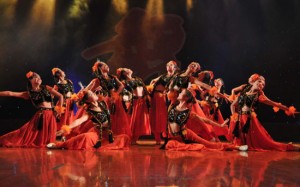 The performing arts of the Chinese culture will come to Dearborn in October through a collaborative partnership between University of Michigan-Dearborn and the University of Electronic Science and Technology of China (UESTC). UESTC students will present various forms of traditional dancing, vocal and instrumental performances, which represent China’s rich culture at a public performance at 3 p.m. on Sunday, Oct. 7, in the Ford Community and Performing Arts Center.

The cultural exchange is one example of the ongoing partnership between UM-Dearborn and UESTC. The universities developed an agreement for collaborative education in December 2011, which resulted in 16 UESTC students enrolling this semester in UM-Dearborn’s College of Engineering and Computer Science. Members of the Student Art Troupe, as well as UESTC president Wang Jinsong and other university leaders and professors will visit UM-Dearborn October 5-7.

“I am very impressed by the rich educational programs and dynamic student life at UESTC,” said Daniel Little, chancellor, UM-Dearborn, who recently visited the university. “I am especially delighted to see the initial results of the collaborative relationship that we have built with UESTC.”

Tickets to the free public performance will be available on a first-come, first-served basis in the Office of Student Engagement at 313-593-5390.

With more than 30,000 students, UESTC is located in Chengdu, Sichuan, province and is regarded as one of China’s top universities in China. Established in 2003, the Student Art Troupe consists of 260 students from the university that perform in eight groups: philharmonic orchestra, chorus, dancing league, drama club, traditional instruments orchestra, electronic band, fine art club and visual design studio. UESTC has performed nearly 500 times and has been awarded 22 national and 59 provincial prizes.

Your guide to Homecoming 2019

Running from September 30 through October 5, this year's homecoming schedule features a mix of new events and classic traditions.

With a resolution to the pandemic nowhere in sight, UM-Dearborn is opting for a winter semester that looks a lot like fall.

Center for Arab American Studies faculty received an Exploration Pilot Grant through the U-M Presidential Arts Initiative. Selected from among the more than 80 proposals submitted, their podcast project highlights Arab American authors.
Subscribe to the Reporter
Back to top of page