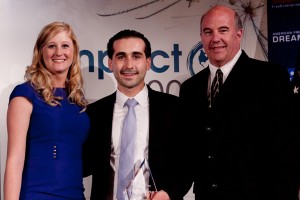 Ali Saad reached into his pocket and quickly looked at his phone. “Sorry,” he said. “I have to take this.”

It’s the common plight of a small business owner: always another call to take, always another task to manage. It’s a plight Saad has taken on since he was 18 years old.

Now, just four years later, the company has been named to the Empact100 list, which recognizes the top 100 companies started by young entrepreneurs. Saad accepted the award in Washington, D.C., last month at a ceremony held at the White House.

“It was with great honor that I accepted the award on behalf of our company, our friends and family, our community and the state of Michigan,” he said. “It was an excellent experience where I was able to show some of the largest CEO’s, executives, entrepreneurs and officials where I came from and what we, as a community, are capable of achieving.”

The Empact100 list is comprised of the top 100 companies in the Empact Showcase, a compilation of the United States’ leading entrepreneurs age 30 and younger whose annual revenues are more than $100,000.

Members of the 2012 Empact Academy—including the founders of Living Social, Chuck E. Cheese, Priceline.com, Redbox and Open Table— finalized the list based on revenue, number of employees, social impact, growth and innovativeness.

Returning to Dearborn after two days of awards festivities, Saad got back to his routine of being a full-time accounting student and full-time general manager, balancing his studies with balancing the books.

“It is hard work,” he said, noting that he often swings by the office after a long day of classes. “It takes time and patience and a lot of planning.”

It’s been that way since the beginning, as Saad worked to carve out a niche for General Fuels Company.

An early restructuring and merger led the company to focus on oil and gas equipment. That division now concentrates on commercial and residential propane gas projects in United Arab Emirates, Saudi Arabia and Qatar. The company recently added a construction equipment division, which is one of the leading exporters from North America to the Middle East.

“Learning from the market has been key to our success,” he said. “Every idea has a shortcoming. But most people don’t know what that is until they’ve jumped into the market.”

Learning in the classroom has aided Saad as well. Often he’ll find lectures to be directly applicable to his work. Class discussions turn into consulting sessions.

“I hope it’s helpful to other students—but I try not to take up too much time,” he said.

It’s all part of the balancing act as he works to finalize his degree while strategizing how to partner with more small businesses both overseas and in the Dearborn area.

When asked how he manages to run his company while a full-time student, his reply is short and matter-of-fact: “I sleep four hours a night.”

Then, as if on cue, he reaches into his pocket. Yes, it’s another call to take.