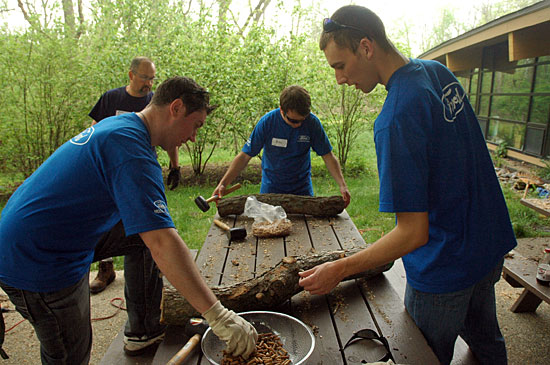 UM-Dearborn's Environmental Interpretive Center (EIC) strives to be a model facility for sustainable living that connects the concept of sustainability to all of its educational programs and projects.

Its latest project-a 1/3 acre urban mushroom garden-aims to encourage residents of Dearborn and surrounding communities to consider growing mushrooms in their homes and yards as a reliable, healthy source of 100% organic locally-grown food. The project is funded in part by a Ford Motor Company 'Better World' grant.

Nearly a dozen Ford employees volunteered their time on May 13 to help the EIC complete the garden, located on the south side of the existing southern rain garden (adjacent to the Center's main building). Also on hand for the garden installation were UM-Dearborn alumna Susan Cischke, group vice president of sustainability, environment and safety engineering for Ford Motor Company, and David Norwood, sustainability coordinator for the city of Dearborn.

During Friday's Ford Action Day, the volunteers helped EIC staff to establish the walking trail system for the mushroom garden, as well as incubation and "fruiting" beds for mushroom production. They also assisted with a second season's worth of mushroom inoculation on logs (pictured in the photo above).

The EIC began work on the mushroom garden in spring 2010. Chris Wright, a local mushroom grower and owner of Easy Grow Mushrooms, partnered with the Center to help it grow several species of edible and medicinal mushrooms, including shiitake, oyster, chicken-of-the-woods, maitake, lion's mane and turkey tail mushrooms. The cultivation of mushrooms is simple, cheap, and has virtually no negative environmental impacts. "Mushrooms can provide a very nutritious food source for urbanites; they are high in protein, low in fat and simple sugars, and are a good source of iron and many vitamins" said David Susko, EIC director.

Mushrooms initially begin life as spores, which are "seeded" by inoculating (injecting) them on dead plant material, such as wood-chips and hardwood logs, according to Susko. The Center has already inoculated more than 100 logs with spores and is expecting the logs to be flush with mushrooms starting this month and lasting through September, he said.

The mushroom garden is expected to yield hundreds of pounds of mushrooms each year, according to Susko, who said the EIC will allocate a portion of its mushroom harvests to branches of Forgotten Harvest and Gleaners Community Food Banks located near Dearborn.

"Certain mushroom species have a short shelf-life of 1-2 weeks, sometimes even 1-2 days, once harvested, and so we would be happy to see them eaten by people in need rather than have them harden and go uneaten on-site," he said.

An average of 15,000 school children, and an additional 20,000 public visitors, tour the EIC and its surrounding grounds each year. All will have the opportunity to visit the mushroom garden. 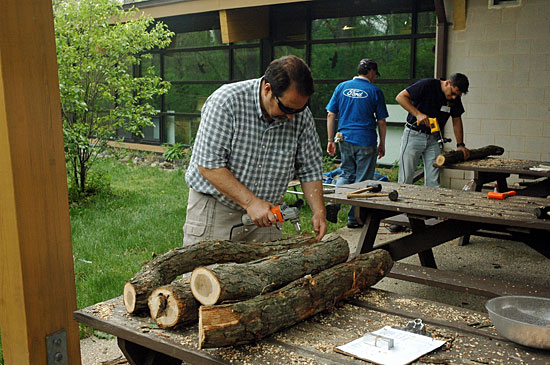 In the above photo, Dave Norwood (foreground) and David Susko (background) prepare logs for inoculation with mushroom spawn. 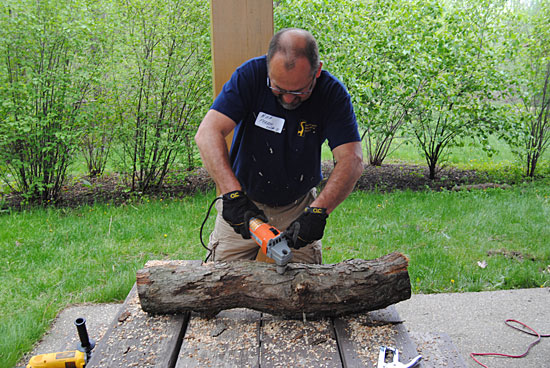 In the above photo, EIC program associate Mike Perrin prepares logs for inoculation with mushroom spawn. 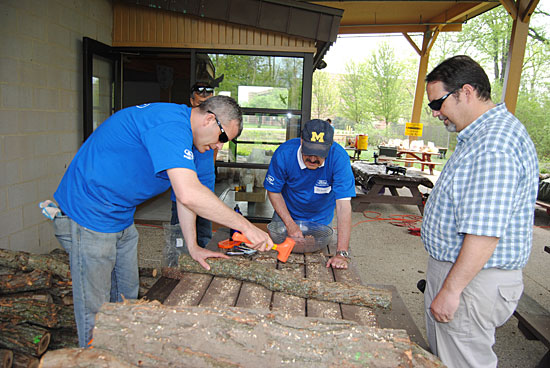 In the above photo, Ford vounteers plug logs with mushroom spawn as Dave Norwood looks on. 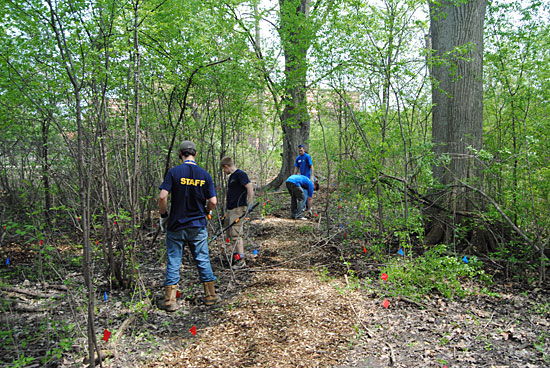 In the above photo, EIC student staff and Ford volunteers prepare the Mushroom Garden trail system. 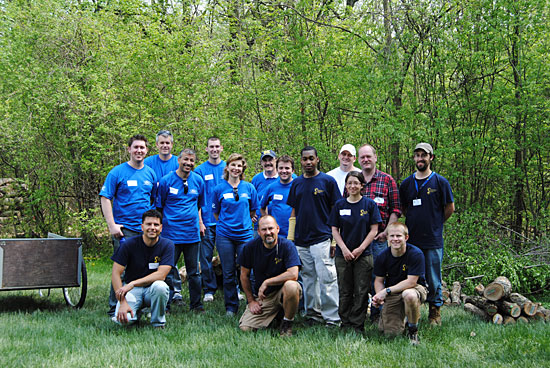 Pictured in the above photo are some of the Ford volunteers and EIC students and staff who worked on the Garden.

At only 18 years old, freshman Alexcia Starks is working to make her Detroit neighborhood a more attractive, sustainable, socially just place to live.

Student organizations continue to thrive in a remote-first environment. Planning the major campus event Take Back the Night, Women in Learning and Leadership (WILL) members say they've had increased connection and better communication.

Researchers focused on the five-year changes in property values, community assets, tax rates and cost of doing business within the community.

What have COVID-19-related changes shown us about community telemental health?

Looking at how the pandemic changed the mental health landscape, one CASL professor says data shows more people are attending mental health therapy sessions and have adjusted to the new virtual environment.
Subscribe to the Reporter
Back to top of page