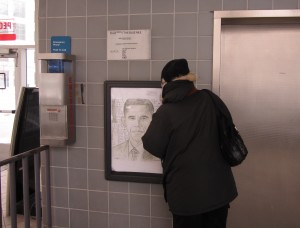 Before stepping onto the elevator, a People Mover rider admires the charcoal and graphite portrait of President Barack Obama drawn by Joshua Johnson, a junior at Douglass Academy for Young Men in Detroit. Johnson created the image for a Black History Month project facilitated by Associate Professor Julie Taylor.

In Detroit’s People Mover stations in February, riders saw unique installations: eye-catching poster portraits of African Americans by local high school students. The artwork is now on exhibit in the reception area of the UM-Detroit Center through March 16.

In honor of Black History Month, 54 high school students in four social studies classes at the Douglass Academy for Young Men studied the biographies and portraits of prominent African Americans. Based on historic photographs, they drew and labeled portraits using pencil and charcoal.

Julie Taylor, associate professor, College of Education, Health, and Human Services, presented the concept to the Academy last summer, and facilitated the project. This is her third year partnering with the school on an enrichment program in history, art and culture.

“You can tell she just loves these students,” said Okezie Iroha, the Academy’s social studies department head. “And they love her as well.”

In addition to President Obama, portraits were of Rosa Parks, Malcolm X, Frederick Douglass, Maya Angelou, Jesse Jackson, Martin Luther King, Jr., and other prominent African Americans. Three of the young men’s drawings, selected by the students themselves through a voting process, were exhibited as posters during the last two weeks of February in the stations of the People Mover. The winning drawings were by Joshua Johnson (Barack Obama), Dakari Randall (Frederick Douglass), and Daylon Randall (Jesse Jackson).

Junior Joshua Johnson, who created a President Obama portrait, said he picked the person who he sees as his role model. “He started from the bottom and he made something of himself,” said Johnson, who enjoys drawing pictures of nature, animals, and his other role model – his Mom. “He believed in himself and he’s at the top now; he didn’t make excuses. When I see him, I see myself.”

Johnson said the project did more than increase his interest in drawing. It improved his confidence. “When I found out that I was voted to have my picture (at the People Mover), I felt good. It was a boost to my self esteem. I wonder what President Obama would think of it? I did my best. I hope he’d like it.”

Taylor saw the impact that the students’ drawings had when she went to see the installations in the stations. “Many people stopped to look at the portraits. The drawings sparked conversations, which is exactly what the students wanted,” Taylor said. “The work these young men have done is inspiring – and so is the support that the community has given.”

For kids with neurodevelopmental disabilities, back-to-school can be a tricky time

A UM-Dearborn lecturer has some practical wisdom for special education families who are navigating a complicated new school year.

Are remote internships worth it? These UM-Dearborn summer interns say ‘yes.’

We get some real talk from four UM-Dearborn students whose summer internships went remote due to the pandemic.