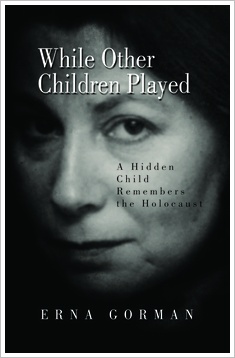 Librarian Barbara Kriigel recently collaborated with Erna Gorman, a Holocaust survivor, to compile Gorman’s memoirs into the book, While Other Children Played: a Hidden Child Remembers the Holocaust.

Kriigel first became acquainted with Gorman in the mid-1990s when the Mardigian Library began working with Prof. Sidney Bolkosky to transcribe interviews he conducted with Holocaust survivors. His 1989 videotaped interview with Gorman was one of the first interviews to be transcribed and made available over the Internet. As the project grew, the Voice/Vision Holocaust Survivor Oral History Archive was established in the Mardigian Library.

Gorman’s memoir tells the tale of how she and her family survived the Holocaust because a Ukrainian farmer had the courage to hide them in his barn. As Gorman, her sister and parents climbed the ladder into a tiny hayloft, no one dreamed that this would be their home for almost two years. The space was very small with just enough room for a small blanket the family could lie or sit on as they picked lice off each other and whispered stories to pass the time. The farmer did his best, but the family’s health quickly deteriorated due to horrible sanitary conditions, lice, vermin and malnutrition.

Although they could hear the farmer’s children playing outside, Gorman and her sister Suzanne had to maintain silence so that the family’s presence would not be revealed. As the days and months passed, the family stopped talking and merely existed. When Russian soldiers liberated the area, the farmer told the family they had to leave. Unable to walk due to atrophied muscles, Gorman and her family crawled through frozen fields to join the soldiers. Sadly, Gorman’s mother was killed several days later by a stray bullet during an airplane raid. 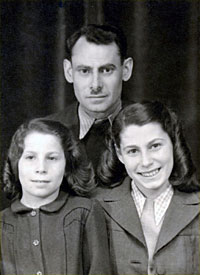 As an adult, Gorman had to come to terms with the horrific experiences of her childhood. She became determined to share her story with others, especially school children, so that they could learn the effects of intolerance, hatred and racism on others. She has been working with school groups for more than 20 years. In December 2009, she received an honorary doctoral degree in education from Northern Michigan University in recognition of her work with students. She gave a moving commencement speech to the new graduates.

Gorman’s book is being published under the auspices of the University of Michigan-Dearborn and the Voice/Vision Holocaust Survivor Oral History Archive. The book is available through Amazon.com. The University also is sponsoring Gorman and the book at the 59th annual Jewish Book Fair. Gorman will make a presentation on Tuesday, Nov. 9 at 11 a.m. at the Jewish Community Center of Metropolitan Detroit in West Bloomfield.

A SURE thing: Guided education for the future

The Healing Power of Artistic Expression

Mardigian Library is creating an archive of campus experiences during COVID through artistic expression and oral history.