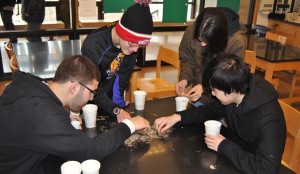 A group of blind children gathered around a picnic table cluttered with shovels, plants, pots and plenty of dirt.

One child, named Austin, slowly reached his hand out toward a row of dogwoods.

Austin grasped the red stem and ran his hand along its buds.

Austin proceeded to loosen the dirt as other children capped off their pots with potting soil. That’s when he heard the sounds.

“There’s all kinds of stuff you can hear sitting right here,” said Austin, who intently listened to the native birds overhead.

Austin and other students from Flushing, Grand Rapids, Lansing and the southeast Michigan region traveled to University of Michigan-Dearborn’s Environmental Interpretive Center on April 6 to build birdfeeders, learn how to capture and band birds, and compare avian skulls and bones. It was all part of the Celebrate Urban Birds event, as organized by UM-Dearborn student and “Difference Maker” Donna Posont.

Through various presentations and exercises, youth and young adults who are blind or visually impaired learned to identify and enjoy Michigan birds by sounds rather than sight.

“By teaching them techniques for identifying urban birds, much is accomplished, in addition to promoting an awareness of the natural environment,” said Posont, who serves as field services director of Opportunities Unlimited for the Blind. “Confidence is gained by the youth in having skills of bird identification and also improved mobility skills from traveling trails in search of birds.”

And they certainly did their share of traveling. Participants learned how to listen and identify songs and calls of certain bird species at the EIC, and then trekked through UM-Dearborn’s natural areas to test their knowledge.

There to help along the way were UM-Dearborn students, faculty and staff.

“Being blind herself, Donna is a person uniquely suited for demonstrating to others how the majority of birding occurs by ear, not by visual identification,” said EIC Director David Susko. “To listen to her encouraging children to use pneumonics to sound out bird calls helps bring an entirely new perspective to bird research and education. The day was truly a remarkable event for everyone to experience.”

Blind and visually impaired residents who participated in the unique event left with a greater awareness of the birds that inhabit their cities and enhance their lives with beautiful music. By educating and enabling blind and visually impaired youth to identify urban birds, Posont helped open the world to them in an area they previously may have thought reserved only for the sighted.

Posont also was able to fund portions of the event with help from her Edward J. Bagale “Difference Makers” Scholarship. That particular scholarship, which honors UM-Dearborn’s retired vice chancellor for government relations, helped Posont fund a number of events this year that helped introduce blind and visually impaired youth and young adults to their environment.