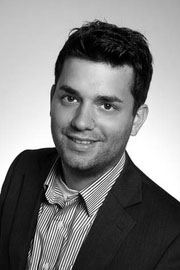 When it comes to marketing, Assistant Professor Philipp Rauschnabel wants his students to see the future clearly—and go beyond 20/20 vision.

Rauschnabel is incorporating marketing for smart glasses—a wearable computer that adds information into reality—into his classes.

“I’m interested in everything that has to do with new technologies. With smart glasses, which are an augmented reality, we are integrating the digital world and physical world. This is a next step,” he said. “Since this has the potential to be big, I’ve included smart glasses functions into my class and for our students to become familiar with the technology and its uses.”

Sophomore Kelly Fitch, who is taking Rauschnabel’s Marketing 352 class, said other than hearing the name Google Glass, she was relatively unfamiliar with digital eyeglass technology until the course.

But her excitement grew when she learned how the computing accessory could help others, both personally and professionally.

For a class project, Fitch helped create the concept of “Order Up,” an app that would assist wait staff, bartenders and chefs in remembering orders, recipes, names and faces.

“Using the computer in the glasses can help you remember who ordered what dish. Even if they change seats, it can quickly help you identify how long it’s been since someone has last received a refill and it could give table progression information,” she said. “Smart glasses, with the right app, can make things much easier for everyone.”

Rauschnabel said additional ideas were a music lesson app that highlighted the correct notes to play on the instrument of the user’s choice and an interior design app that can pull in-stock item images for area stores and place them in a room for the user to view.

“The students on our campus are very talented,” Rauschnabel said. “There is so much potential in the new technology and they recognized that the next step is going beyond the screen.”

Rauschnabel, who researches social media, brands and technology trends, recently had an article on smart glasses research published in Computers in Human Behavior. In the 2015 publication, he looked at awareness and adaptation of the emerging technology.

“To my knowledge, it’s the first study to investigate augmented reality devices, like smart glasses, in a personal context,” Rauschnabel said of the study he and co-authors Bjoern Ivens and Alexander Brem conducted surveying more than 200 respondents.

“We looked at the interplay between personality traits and the expectations concerning smart glasses. People who had more open personalities intended to buy Google Glass for its functional benefits; extraverts who expected the trend to become popular were interested in adopting the technology to assimilate with others.”

He said there’s more research to conduct as the technology unfolds, including design elements of eyewear and the pros and cons of the imaging system for both individuals and society.

But, for now, Rauschnabel’s focus is getting ahead of the trend. And taking his students with him.

“The benefits of having digital and physical information in your view field—that melding of those two worlds—will be important in the future,” he said. “We might not know exactly what it looks like right now, but with open minds, raised questions and creative applications, we’ll be ready for it.”