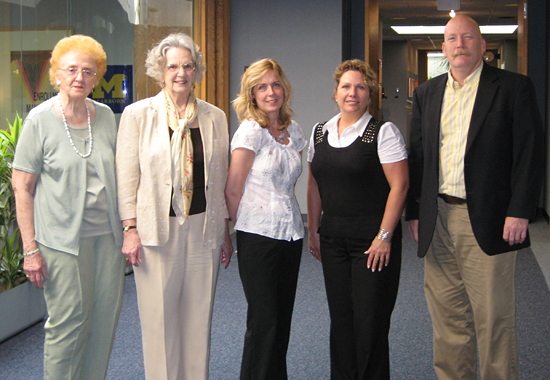 For more than 80 years the professional women of Pi Omicron were known throughout southeast Michigan for their philanthropic projects and networking opportunities. And while the formal group disbanded several years ago their legacy continues at UM-Dearborn.

In 2009 the group endowed the Pi Omicron Philanthropic Sorority Scholarship in memory of Ruth Heyman, their former national president.  The scholarship supports economically disadvantaged adults—many of them single parents—as they complete their U-M degrees and build a better future. It is awarded annually to junior and/or senior level students that need support to continue their education.

Sharlene Day (’11 CASL) received the scholarship during the fall 2010 semester and credits it with her ability to complete her degree. Day, a single mother with two grown children and a 12-year-old son started at UM-Dearborn through the Student Outreach and Academic Resources (SOAR) program aimed at increasing access to the University for non-traditional adult learners.

“Worrying about how I was going to make ends meet became routine for me at the beginning of each semester,” says Day. “There were times when I had two part-time jobs taking classes or a full-time and a part-time job taking two classes.”

As graduation grew closer, Day had a real dilemma about how she was going to make her required student teaching work.

The ongoing impact of Pi Omicron is something that Ruth Heyman, a Pi Omicron icon, would be proud of according to Dorothy Watters, past president of Tau Alpha Gamma, the local Pi Omicron chapter and Phyllis May, past national treasurer, Pi Omicron. Heyman served as national president of Pi Omicron from 1960-1964 during which time she was determined to travel across the country visiting all of the chapters of the organization.

“Ruth was such a great mentor to other members of our organization she made everyone around her always feel at ease,” says Watters. “She was such an accomplished individual and understood what it meant to come from humble means and work hard, that’s why developing a scholarship was so important to her.”

“We are so pleased that we could honor Ruth’s memory in this manner,” says May. “The recipients of the scholarship are such impressive individuals who have gone through so much turmoil in their lives and already accomplished so much. I know Ruth would be thrilled we could help.”

SOAR director Ellen Judge-Gonzalez knows how much these scholarships can mean to her students, especially when they are nearing graduation and no longer receive reduced tuition.

“I love the premise that the scholarships are coming from a group of professional women that saw a need and banded together to form a networking group for themselves when there weren’t other options,” says Judge-Gonzalez.  “This group was formed by strong powerful women who were pioneers in their own right and we are so thrilled to be able to continue their legacy here at UM-Dearborn.”

Four years in a row

UM-Dearborn’s counseling director explains why Zoom therapy isn’t as popular as you’d think but easy-to-access wellness activities are booming.
Back to top of page