The reel story: Students share Detroit’s story, one documentary at a time 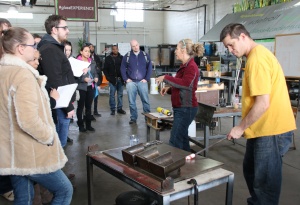 In the Academic Service Learning course JASS 315: Media Production for Metropolitan Community, Glass Academy co-owner Michelle Plucinsky gives students a tour of the workshop to help give them ideas for their short documentaries.

Each person sat in a chair. In their hands, were pieces of clay art.

A man with a vase. A woman with an intricate drawing on a vessel. A teen with a bowl.

Working on a short film about Pewabic Pottery’s educational classes, Bart Woinski wanted to convey the pride people felt when they saw their finished work at the historic Detroit institution. So he filmed people, portrait-style, and turned it into a montage.

Enrolled in JASS 315: Media Production for Metropolitan Community, Woinski said many of the lessons he was learning¬¬¬—camerawork, lighting, equipment needs— were new to him.

But he knew what his end goal was: To showcase their pride and their community.

“In Pewabic’s classes, you could see how happy people were to create, and I wanted to convey that to the viewers,” said Woinski, a journalism and screen studies student who took JASS 315 in Winter 2015. “I didn’t know how it was going to turn out, but the montage was my favorite moment of the video. Their art may not have been technically perfect, but they were pleased and wanted to share.

“I guess that’s how I felt about the video too.”

Now, with an additional year of filming experience under his belt, Woinski is helping a new group of JASS 315 students. He’s the course assistant.

The class is designed to showcase the Detroit community while teaching students production and storytelling. Course instructor Jennifer Proctor offers complimentary video footage and short documentaries to an organization in exchange for allowing students to work on location and gain experience.

The short documentaries, which can be about anything from a studio pet to the production process, also are housed on the website Detroitlandstories.org.

Proctor’s goal for the ASL course is to educate people—the film viewers and the students—about the Metro Detroit region. She got the idea after watching several Detroit-based documentaries.

“I noticed that things were portrayed too simplistically,” said Proctor, assistant professor of journalism and screen studies. “It’s not as negative or as positive as was shown. Like everything, the reality lies somewhere in the middle. ”

Having faith in the students’ talents and discussing with colleague JASS Clinical Professor Jim Gilmore what the program could do to help share Detroit’s story, a course to challenge and encourage students to explore—both the Metro Detroit area and their personal points of view—was created.

“It’s important for students to make sure they are authentically representing people that they are filming. And, then, to reflect back and challenge any preconceived notions that they may have had,” she said. “This class, in addition to learning the technical skills, is about making yourself a better informed and more engaged citizen.”

This year, the class is partnering with Glass Academy in Dearborn. Students went on a tour of the facility last week to spark ideas for their documentary pieces.

In addition to visual interest, Proctor chose Glass Academy because owners Michelle Plucinsky and Chris Nordin have been creating glass for decades, are well connected in the arts community and have studio locations in Detroit and Dearborn.

In the Dearborn-based Glass Academy, Woinski, along with Plucinsky, led the class around the warehouse.

They had the students note the time of day and how the light came in through the windows. They talked about noise levels. And they encouraged the students to look around.

Plucinsky is glad Proctor reached out to Glass Academy to partner with the course.

“If we can talk to students and say ‘check this out’ or ‘did you know about this?’ maybe we can instill a lasting excitement about the creative process,” she said. “It’s important to pursue artistic endeavors and open up people’s worlds to more than the average, everyday life.”