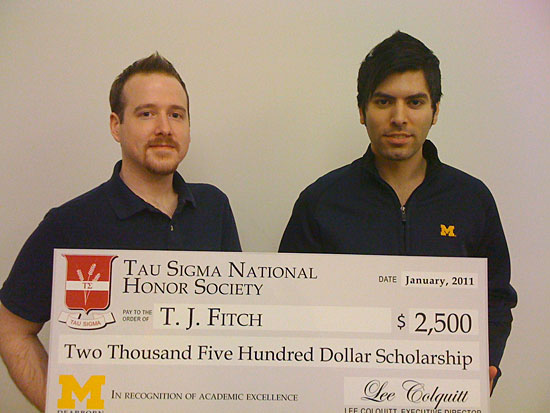 For the second year in a row, a UM-Dearborn student has received the highest scholarship given by the Tau Sigma National Honor Society, an academic society that recognizes and promotes the academic excellence and involvement of transfer students.

Timothy Fitch, a student in the School of Education’s special education program, was one of only two scholars nationwide selected to receive the organization’s top scholarship of $2,500. In all, Tau Sigma awarded 31 scholarships totaling $27,750.

In the photo above, Fitch (at left) is pictured with last year’s campus Tau Sigma scholarship recipient, Menas Houstoulakis.

UM-Dearborn established a campus chapter of Tau Sigma National Honor Society in 2009; at the time, it was the first school in Michigan to form a chapter.

Four years in a row

UM-Dearborn’s counseling director explains why Zoom therapy isn’t as popular as you’d think but easy-to-access wellness activities are booming.
Back to top of page