While on the grounds of Auschwitz-Birkenau, Katrina Stack had one thought run through her head: “I’m walking on ashes.”

The history major said she spent her winter semester researching the concentration camp's architecture and its evolution during World War II. But nothing prepared her for the real thing.

“What could they do with the ashes of more than a million people? The answer was heartbreaking; it was used as fertilizer and as a way to prevent the ground from being slick in the winter,” said Stack. “I was there and I took photos, but the pictures do no justice to this place's size or the feelings it gave me.”

Stack was one of 12 University of Michigan-Dearborn students who studied abroad in Poland this summer for the course, “Memory and Oblivion: Polish and Polish-Jewish History in the Polish Modern Landscape.”

Organized by Eastern European History Assistant Professor Anna Muller and Voice/Vision Holocaust Survivor Oral History Director Jamie Wraight, the month-long experience took students to places including the Museum of the Warsaw Uprising, the former Jewish district in Lublin, and the European Center of Solidarity in Gdansk.

Muller said one goal was to give students somewhat unsettling, but transformative experiences.

“They were exposed to new places and people. In some situations, they were very uncomfortable, but that feeling was actually important for education and for helping them grow,” Muller said. “It’s important to study, yes. But it’s also important to experience. There is nothing like standing somewhere and going through the emotions.”

The three-credit history course, which was open to students of all majors, took 18 months to organize. The idea came from a conversation between Muller, who is from Poland, and Wraight, whose research focus is the Holocaust.

Wraight said in addition to planning the class, there was a fundraising effort. Nearly $15,000 was raised to help students’ with expenses by donations from people throughout Metro Detroit, including a large gift from Steve and Lori Weisberg of West Bloomfield. The Weisbergs had grandparents, aunts, uncles, great aunts and great uncles who were murdered during the Holocaust.

“We are very thankful for the generous donations for scholarships. Donors, like the Weisbergs, wanted the students to have a better knowledge and understanding of what occurred and to learn from it,“ Wraight said.

He said it’s important for students to have an opportunity to be immersed in another culture.

“To me, this was more than teaching students about history. It was teaching life lessons. They were going places and experiencing things that were no longer something just they heard about or read about. It was real,” said Wraight, who said UM-Dearborn’s College of Arts, Sciences, and Letters plans to offer a similar study abroad course every two years. “For some students, it was their first flight and the first time outside of Michigan. This was a big step.” 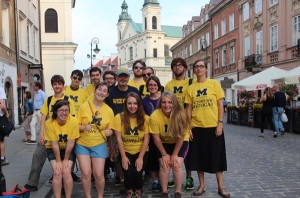 In addition to touring historic sites and learning about the intersection of Polish and Jewish history, they met with peers at the University of Gdansk, which is in Muller’s hometown. Wraight said they planned “lighter” activities—such as meeting with peers—to balance out the gravity of the history students’ experiences.

“There is so much I miss about Poland—the food, seeing things in person that I’ve only before seen in pictures, living in different hostels and hotels, saying words like dziękuję (thank you), proszę (please) and przepraszam (excuse me). But what I miss the most are my friends,” he said. “I couldn’t be more thankful for this trip. The connections I have made on this trip are going to last a lifetime.”