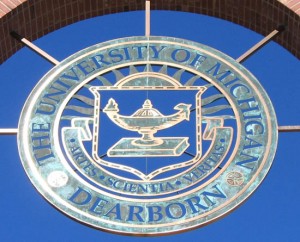 University of Michigan-Dearborn officials announced the largest enrollment in the university’s 52-year history. Total enrollment for fall 2012 is 9,083 students, an increase of 128 students—or 1.43 percent—from last fall. This marks the fourth consecutive year of enrollment growth.

“To see a record number of students choosing to invest in their futures at UM-Dearborn is a vote of confidence for our Michigan excellence and our UM-Dearborn community,” said Stanley E. Henderson, vice chancellor for enrollment management and student life. “Strong enrollment shows student response to our campus-wide commitment to provide students with excellent academic opportunities in a supportive and inclusive environment.”

Enrollment includes an incoming freshman class of 889 students. The make-up of this class continues to grow in diversity as the university saw a 15 percent increase in Asian-American students among entering freshmen. Academic achievement remained strong: The average high school GPA for freshmen is 3.6, up from 3.5 last fall, and the average ACT composite score is 24.28, the highest in at least 10 years.

Enrollment also includes an incoming transfer class of 843 students, the second largest class in at least 28 years and the third consecutive year of a transfer enrollment of more than 800. The university saw a 17 percent increase in African-American students among entering transfer students.

Graduate student enrollment decreased slightly from 1,476 students to 1,457 students. However, that number includes 369 new graduate students, the largest number of new students since 2007 and an increase of 14.38 percent from 2011.

“Graduate programs have been especially hard hit in recent years as businesses stopped offering tuition reimbursement programs for their employees,” Henderson said. “Strong new student enrollment in these programs is encouraging both for the university and for the region as it continues to recover.”

Creating connection through art and expression

How can UM-Dearborn decarbonize its commuting culture?

Associate Professor Wencong Su breaks down some technology and culture changes that could help us cut carbon emissions from personal vehicles.

Vaccine hesitancy: A side effect of systemic racism

African and African American Studies Assistant Professor Terri Laws talks about the role of transparency, acknowledgement and actionable change in repairing the broken trust behind the COVID vaccine hesitation in communities of color.
Back to top of page