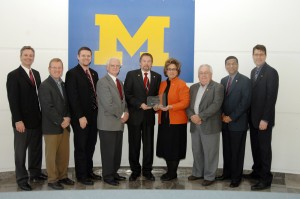 Representatives from University of Michigan-Dearborn congratulate the City of Sturgis, Mich., for the city's commitment to business development.

Eight communities across the state of Michigan have been identified for the strategies they employ to foster entrepreneurial growth and economic development, according to the annual eCities study. The study, conducted by iLabs, University of Michigan-Dearborn’s Center for Innovation Research, identified Imlay City, Madison Heights, Meridian Township, Midland, Mount Pleasant, Sterling Heights, Sturgis and Tecumseh for their incentives, innovative programs and best practices geared toward business development.

“These communities are being recognized for the best practices they utilize, which include the right mix of tools and resources for their business community,” said Tim Davis, director, iLabs. “They listen to companies, help them with governmental processes, connect them with other companies and listen to what both new and existing businesses are saying. They are the definition of partners in the process and not just a service provider.”

An additional 44 communities also are recognized as five-and four-star performers.

“This annual project makes the university part of the local leader’s toolkit for economic development. We are tackling a statewide concern and analyzing the parts that local leaders can directly impact,” Davis said. “Participating communities can identify best practices and methods they can implement to aid in job growth, economic diversification and development of entrepreneurs.”

The communities will be honored today, Thursday, November 14, at UM-Dearborn. Support for eCities 2013 is provided in part by the DTE Energy Foundation, Point and Pay, Oakland County Economic Development and Community Affairs and UM-Dearborn’s College of Business.

The annual eCities research project, which began in 2007, uses data supplied by the participants, as well as other public records to assemble a six-factor, 32-item index of entrepreneurial activity, looking at such factors as clustering, incentives, growth, policies, community and education. The study focuses on entrepreneurship because of its importance to expansion and diversification of Michigan’s regional economies and the impact small businesses have on job creation. To date, 182 communities across Michigan have participated in the study.

Researchers focused on the five-year changes in property values, community assets, tax rates and cost of doing business within the community.

iLabs consulting-style research experience is open to students across campus. Applications are now accepted for the Winter 2021 term.