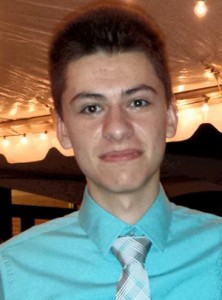 The headlines paint a bleak picture of uncertainty: Ukraine’s slow collapse. Hundreds killed in Ukraine despite ceasefire. Russia invades Ukraine—again and again and yet again.

That uncertainty of Ukraine’s current political climate motivated Taras Garapiak to get involved in international politics. Now the University of Michigan-Dearborn student has a national platform to offer insights on the country’s political and social climate.

Garapiak has been featured as a political writer in the Huffington Post for his review of the upcoming Ukrainian Parliamentary elections and the heavy Russian influence in Ukraine. And his op-ed about Ukraine’s new defense policies after Ukrainian President Petro Poroshenko’s visit to the U.S. was published in The Hill, a publication focused on the U.S. Congress.

For Garapiak, the work is personal.

“Having Ukrainian roots has definitely directed my area of study and research,” said Garapiak, who is double majoring in international studies and political science. “Being from Eastern Europe, I am very interested in that area and how politics work there particularly the relationship that Eastern European countries have with Russia.”

Garapiak had the opportunity to write about Ukraine as part of his internship at the Center for American Progress (CAP), a public policy research organization based in Washington, D.C.

That means writing isn’t the only item on Garapiak’s agenda. His semester-long internship is a crash course in national and international affairs and he has attended events and speaker sessions with members of the Supreme Court. He also works on independent research projects on issues related to national security and international studies.

“It is beyond exciting to see Taras' writing showing up in such highly regarded venues,” said Martin Hershock, dean of the College of Arts, Sciences, and Letters. “What is even more prescient is the case that Taras makes for the impact of engaged learning. The ability to take what one learns in the classroom, infuse it with "hands on" work in the trenches, and to reflect upon the intersections between theory and practice is, as Taras makes clear, incredibly powerful.”

Garapiak earned a place in CAP’s internship program through a competitive application process done in partnership with U-M Ann Arbor.

Professor Ulrich Kamp is using 90 years of images to visually show how the glaciers in the Andes of Southern Peru are rapidly melting — and hopes seeing is believing. His research is one of nine faculty projects highlighted in CASL's Faculty Research Slam on Oct. 28.

For this year’s DTE E-Challenge, an interdisciplinary team of faculty and students will leverage everything from artificial intelligence to “shaming” to reduce our energy footprint.
Subscribe to the Reporter
Back to top of page