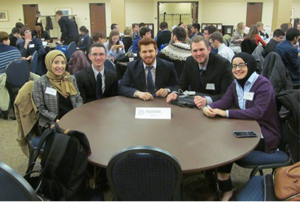 A little more than 25 years ago, Ronald Stockton went on a Middle Eastern journey that changed his life.

He traveled to Jordan as a part of a higher education initiative through the National Council on US-Arab Relations. He met Jordanian political activists and historians. He visited desert castles. He saw the personal side of the country.

“It changes your whole view just to walk around the streets and how people live their daily lives, it’s as simple as seeing how bread is sold or hearing how someone is trying to repair their home,” said Stockton, professor of political science and a research associate at the University of Michigan Center for Middle East and North African Studies. “We’re all people. Just ones who have had different experiences.”

Upon returning home from his month-long travels, Stockton wanted to do what he could to give his students an International experience of their own.

The result: The creation on the University of Michigan-Dearborn’s Model Arab League (MAL), and a current 14-year consecutive win streak as the most outstanding delegation at the Michigan MAL Conference.

The MAL is the National Council on U.S.-Arab Relations’ flagship student leadership development program. It’s similar in organization and format to the Model United Nations, but the MAL focuses only on the 22 member states that comprise the League of Arab States.

“When I got back from Jordan, I thought, ‘The National Council on US-Arab Relations does great work. What can I do to get involved with this?’ I met their director and was told about the Model Arab League. I started a League here in 1988. We’ve been competing every single year since,” said Stockton, who continues to advise the team.

The students were divided into two teams—one representing Jordan and the other Palestine. Team members representing each country were assigned to different committees—Political Affairs, Environmental Affairs, a Council on Palestinian Affairs, Social Affairs, and a Joint Defense Council.

In preparation of the competition, Stockton said students had an intensive month-long training about the general conflict and cleavages in the Middle East as a whole, specifics regarding each of their represented countries (history, economics, military action, resources), resolution writing and parliamentary procedure.

“Students have to stay in character and represent their country. They can’t represent their own views, which is a discipline for them,” he said. “You have to see things through the eyes of someone who is different than you and has a different experience. It’s not an easy task. But if you can master this skill, it will help you through the rest of your life."

Political science sophomore Julia Kassem said this is her first year on the MAL team. And it won’t be her last.

“Dr. Stockton shows passion and understanding of Middle East politics. This is an interactive way for me to explore that too,” said Kassem, who represented Jordan on the Joint Defense Council committee. “Winning is exciting, but, to me, Model Arab League is more about the experience. It has taught me how to negotiate and how to discuss the political process in an international context. This is more than a narrative-based history; it’s applying what we’ve learned into a political framework.”

Stockton said Kassem and all of his UM-Dearborn MAL representatives have made him proud.

“Our students are very dedicated. They aren’t doing this for a grade. They are doing this to learn. They don’t come in knowing everything, but they are open minded, work hard and apply it,” he said. “What more can a teacher ask for?”

Two UM-Dearborn experts explain why machine learning is vulnerable to bias and why fixing the problem is such a big challenge.
Subscribe to the Reporter
Back to top of page