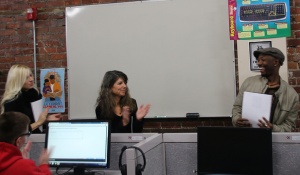 Graduate student Sara Smith and Associate Professor Liz Rohan encourage Duane Mallard, who is studying to earn his GED, to share his story.

One by one, students at Southwest Solutions Learning Lab in Detroit shared why they didn’t finish high school.

“I had to help support my family.”

“I witnessed a murder and was scared to leave the house.”

“My school closed and I didn’t have a way to get to my new one.”

Their reasons were all different—but their goal is the same: to pass the GED test and finally earn a diploma.

Composition and Rhetoric Associate Professor Liz Rohan and graduate student Sara Smith are working to give the Detroiters both the tools and the confidence to achieve it—and more.

Rohan said she often sought out ways to get involved in community literacy. When she saw a statistic that only 11 percent of GED graduates attend college, she looked for civic engagement opportunities to teach writing to better prepare students for the GED writing portion and educate them about attending college.

For 18 months, Rohan and Smith—who earned an Advancement for Teaching and Learning Fund grant from the university for the project—met regularly with 20 students at Southwest Solutions Learning Lab. They talked about writing basics, like sentence structure, to more advanced concepts, like storytelling.

Southwest Solutions President and CEO John Van Camp said for Detroit to keep moving forward, it’s important not to leave anyone behind.

“Often we hear about Detroit’s resurgence, and that’s exciting. But it’s about the new people moving here or businesses coming in. We don’t hear about the people who are the heart of our city—the legacy Detroiters—and what they are doing to improve themselves,” said Van Camp, who has worked at Southwest Solutions for 43 years. “I think it’s important to circulate stories about the lives of hard-working and ambitious Detroiters and their struggles to get ahead. For Detroit to move forward and stay successful, they need to be successful too.”

Using the skills Rohan and Smith taught, each student wrote an introspective essay about their personal journey—where they’ve been, where they are now and what they want for their future.

The end result of the nearly two-year experience was a book of short autobiographies that Rohan had printed and bound. Each student received a copy. And, on the last day of the project, many students shared their chapter while standing in front of the class.

In a soft-spoken voice, Bryony Grant told her story. She talked about moving to Detroit from Jamaica as a child, losing her grandma, who was raising her, and her struggle to find focus and self-confidence.

At the end of her presentation, the 21-year-old went back to her computer workstation with a smile on her face.

“Before this, I never felt like writing. I didn’t realize I had something to say. This really inspired me and got me writing, writing, writing. I got so into it that I didn’t stop,” she said. “I didn’t know that I could write like that or get up in front of a group of people and talk. But I did. Who knows what else I can do?”