To help the campus community learn more about issues they may encounter on the ballot, two UM-Dearborn students are working with the U-M Dinners for Democracy Program to facilitate interest on campus for the virtual sessions. 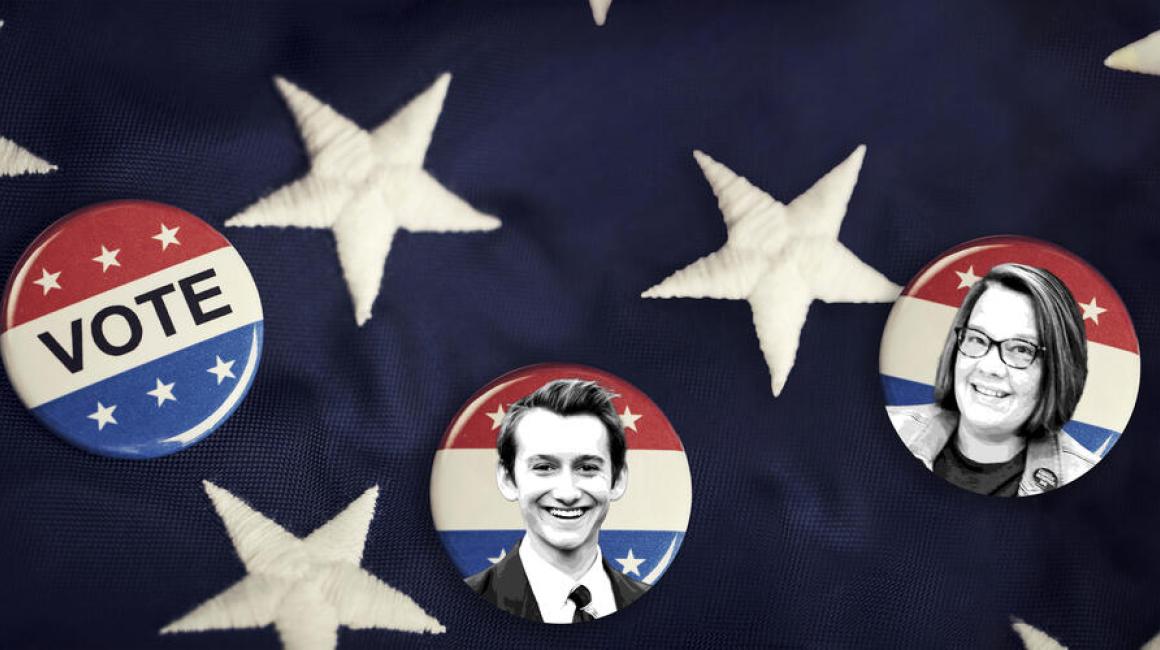 UM-Dearborn students Sammy Caruso and Penny Kane want campus to get involved with the virtual Dinners for Democracy events. Graphic by Violet Dashi

UM-Dearborn students want to create positive change in their communities and beyond — and sometimes all that takes is one vote.

UM-Dearborn sophomore Sammy Caruso has worked on the political circuit since he was in eighth grade. In high school, he even helped a friend land an elected role on his Ohio hometown’s 2019 city council by running the campaign. “Every vote counts. She was one of the youngest elected council members — and she was just re-elected. Experience is important, but so is passion. People can tell when your heart and mind are in the right place no matter how old you are.”

Senior Penny Kane has a bit more political experience under her Uncle Sam hat — she recalls making posters, sending flyers, and filing in the 1972 U.S. presidential campaign. Her parents were politically active and taught her to use her voice to educate people too. She’s helped run voting booths in her Oakland County precinct.Kane also has worked with voter education,and helps register students with Campus Vote Project.

“I’ve seen for myself how a candidate wins by one or two votes after all the votes are counted. So I know how important voting is — but sometimes we don’t know what’s out there that’s being voted on, or it can be challenging to find information about an issue that is factual with multiple sides of an issue or candidate represented.”

Both students are using their experience and excitement toward the political process to help the UM-Dearborn community learn more about issues they may encounter on future ballots. Caruso and Kane, a Political Science major and Criminology and Criminal Justice major respectively, are research assistants for U-M’s Dinners for Democracy Program. They work with the Ann Arbor-based program to represent the UM-Dearborn community and facilitate interest on campus.

Designed by U-M’s Turn Up Turnout, Dinners for Democracy are non-partisan learning opportunities that cover issues important to student voters with student-led presentations and facilitated dialogue. The initiative's faculty adviser is U-M Political Science Professor Edie Goldenberg, professor of public policy in the Ford School and Turn Up Turnout’s founder.

“Dinners for Democracy help students connect the dots between the issues they care about and how to use their votes to make a positive difference to those issues,” Goldenberg said in a recent Record story.

Topics include the politics of renewable energy, redistricting, voting access, voting rights and the future of the Great Lakes. Sessions are run by students, but the sessions are open to students, faculty and staff. Check out upcoming sessions here.

“It’s important for me to stress that these are nonpartisan. Prior to a presentation, we share it with the Dinners for Democracy steering committee for vetting. We critique each to make sure all sides of an issue are represented well and that information is cited,” she said. “People need accurate and thorough information to make informed decisions.”

Kane said the peer-to-peer, issue-based education explains how and why relatively low-visibility elected offices at the state and local levels matter to each issue, where to find additional research-based information about each issue, and how to find or collect non-partisan information about where candidates for office stand on each issue.

Attendees receive a $15 gift card to select from a list of restaurants/stores at the end of the virtual event. U-M community members — sessions are open to all current Wolverines, but geared toward students — are welcome to participate in as many dinners as they’d like, though gift cards are limited to one per person per topic.

Sessions aren’t going to heal all the systemic challenges to democracy — from voting access and misinformation to the impact of global environmental pressures and systemic racism — but they are trying to find an engaging approach to have productive conversations and help people move forward in a deeply polarized political climate.

Caruso, who began working with Dinners for Democracy in the spring said this experience — along with the others he’s gotten since he began on campus in Fall 2020 — has only reinforced his decision about becoming a UM-Dearborn Wolverine.

As a high school student, he considered UM-Ann Arbor and Ohio State. But after visiting the Dearborn campus, he enrolled after hiking in the 300-acre natural areas on campus, seeing the cultural diversity and hearing about undergraduate research opportunities.

“You get the individualized attention that UM-Dearborn is known for, with UM-Ann Arbor benefits,” he said. “It really is having the best of both worlds.” For example, Caruso said he has the opportunity to take part in events on both Dearborn’s campus and Ann Arbor’s campus. “I missed seeing Sen. Bernie Sanders when he was at the Fieldhouse (in March 2020) — I was at the Iowa for the caucuses at that time — and remember feeling so impressed that we had a presidential candidate on campus. Sen. Elizabeth Warren was on Ann Arbor’s campus last week for a Policy Talk @ The Ford School, so I went to that. Michigan attracts well known and experienced politicians and political scientists.” Caruso said he also bought student football season tickets and traveled to The Big House for home games.

But, out of all the activities Caruso and Kane are involved in on the Michigan campuses, political engagement is what they enjoy doing. And it’s the legacy they want to leave when they graduate.

“People arguing over who is right doesn’t lead to real policy and change. People are motivated to be politically engaged and we want to see a change in our lifetime,” Caruso said. “We need events like Dinners for Democracy to connect people with information they can use to come to an educated decision that’s right for themselves and their communities.”