The U-M Academic Women’s Caucus honored the College of Engineering and Computer Science for its diversity efforts.

Ask College of Engineering and Computer Science Dean Tony England why his college is pushing hard to build a more diverse body of students and faculty, and he’ll strike a philosophical tone and start talking about democracy.

“I really have a strong feeling—and I think many others feel the same way—that the democracy we’re trying to create and defend and improve really depends on shared opportunities,” England said. “It’s the idea that someone must be able to, through their own energy and talent, achieve something.”

But creating equal access to those opportunities is where things often get complicated. For England, one of the more fundamental, but often overlooked, aspects of opportunity is visibility. That is, for an opportunity to be meaningful, it first has to enter your imagination—and be recognized as falling within the range of possibilities for one’s life.

“We are located in an area with a lot of financial challenges,” England explained. “So imagine if no one in your family has gone to college, and none of your friends are going to college. Or if you’re a young woman, and your peers think engineering is just for geeks or not an attractive thing. I talk with some parents, and they say they wouldn’t want their kids to be engineers because all those jobs were outsourced to China. And that’s simply not true: Michigan has the most engineers per capita of any state. So opportunity depends on augmenting it with the right information.”

That idea has been central to the college’s effort to boost enrollment among women and lower-income students. And current UM-Dearborn students, England said, have been key players in that work. Members of clubs like the Society of Women Engineers, the National Society of Black Engineers and the Society of Hispanic Professional Engineers regularly volunteer their time in area middle and high schools. Others have taken on mentoring roles in the Near Peer program, which places engineering students in high school classrooms as student assistants.

“They’re better ambassadors than we could ever be, because they’re living examples of what we’re talking about,” England said.

These and other efforts have started to pay off. The percentage of women students enrolled in the college has climbed from 11 percent to 19 percent over the past six years.

CECS also made big gains in the number of women faculty, which shot up from just two to eleven over the same period. “We took a really hard look at biases in the hiring process, and the result was more opportunity for women. We always try to hire the strongest faculty member; you’re never hiring someone for gender,” England said. “But you must use certain practices to make sure you’re being objective.”

Receiving the Rhetaugh G. Dumas Progress in Diversifying Award from the U-M Academic Women’s Caucus last week is a major feather in the cap for the college. But for England, he’s proudest of the teamwork that led to the honor.

As he talks, he naturally weaves into the conversation other names from the college who’ve been instrumental to the effort: Veteran faculty like Bruce Maxim, who regularly brings young people to campus; and newer faculty like DeLean Tolbert, who’s poured her energy into the cause since day one. It’s clear he’s something of a reluctant frontman when it comes to accepting the award.
“I like that the award is not for a person—it’s for the unit,” he said. “So it honors everyone who’s had any part in that. And while I’m very pleased, it’s not for the honor. It’s because it reinforces for all the faculty and staff and students who have been part of this that doing this work is something that’s important—and that it’s making our campus a better place.” 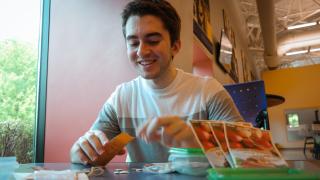 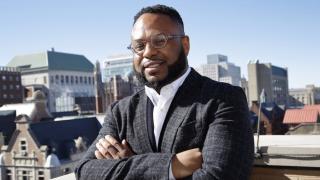