New gardens, parking and major progress on the new ELB top the list of campus updates.

If you’re feeling like it was a particularly busy summer for campus construction, upgrades and renovations, your instincts are spot on.

In fact, both Kate Pepin and Gary Taylor, who between them have 40 years of experience looking after UM-Dearborn facilities and grounds, said they can’t remember a more frenetic June, July and August. From additional parking to a new native plant garden, here are a few of the big projects our facilities teams hustled to complete in time for the fall semester. 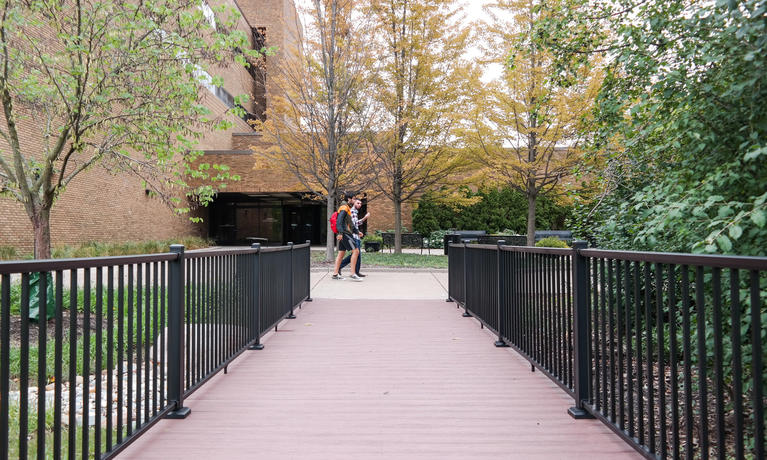 Located in the heart of campus on key thruways, several totally rebuilt pedestrian bridges are one of the campus updates you’ll use every day. The new composite decks, which replace the old treated lumber planks, are made from recycled plastic that’s both more durable and sustainable. 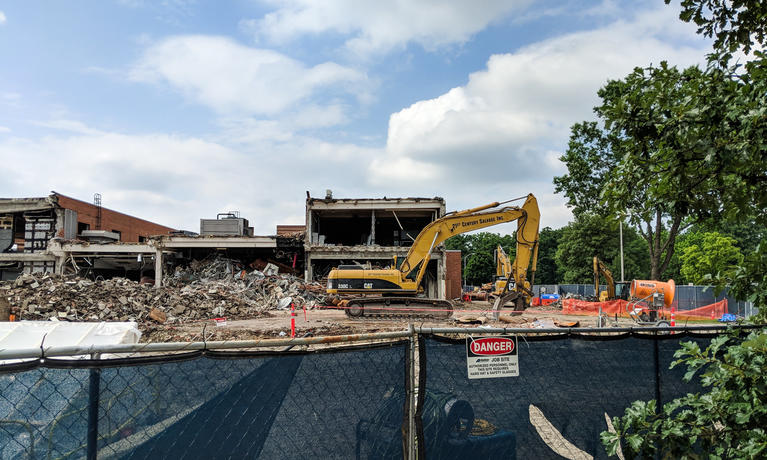 A ton of work on the new $90-million Engineering Lab Building has been completed since the first shovels of ceremonial dirt were flipped back in April. But you may have noticed the summer’s worth of steady activity lacked a dramatic wrecking ball moment for the old ELB. That’s actually because only a smaller part of the old structure on the southside is getting totally removed, according to project manager Emily Hamilton. The rest is being carefully deconstructed down to its concrete and steel skeleton, with a goal of recycling as much as 80 percent of the old material. (So far, the team has recycled more than 2200 tons of concrete and 15 tons of scrap metal; plus, the new building is shooting for a LEED Silver certification). Hamilton told us by the time the ELB is reskinned and fully renovated, it will basically be “unrecognizable” — except for a few industrial architectural references that pay homage to the original concrete frame. Look for construction on the all-new part of the ELB — a dramatic three-story “tower” on the south flank — to begin around October. And with basically a nonstop construction schedule, expect Richard Drive to remain closed for the foreseeable future. You can find safe alternative pedestrian routes and ways to access additional parking lots on the university's website. 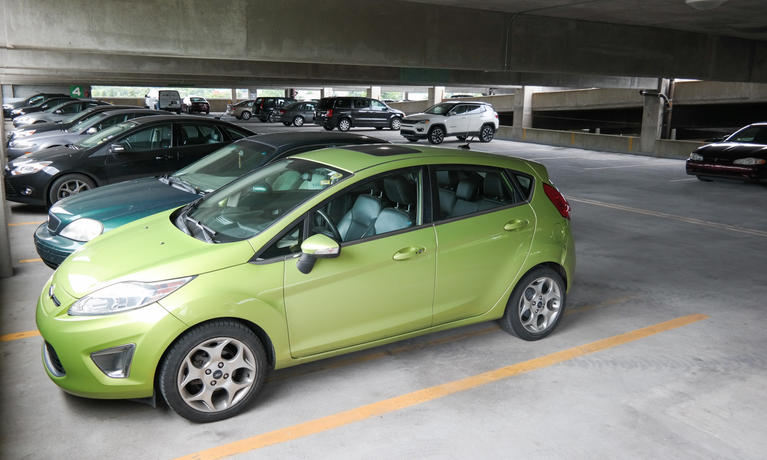 For commuter campuses, parking is a key lifeline, and UM-Dearborn starts the new school year some notable upgrades. An expansion of Lot E4 off Richard Drive between the Mardigian Library and the University Center adds 60 new spots of surface parking. And the horror-movie-esque sounds coming from the Monteith Parking Structure all summer were also part of that cause: That was actually the noise of chains being dragged across the decks on levels 4 and 5, which generated acoustic vibrations that helped crews detect hollow areas in the surface. Those weak spots were then jackhammered out and replaced with fresh concrete. The top levels are now back in action. 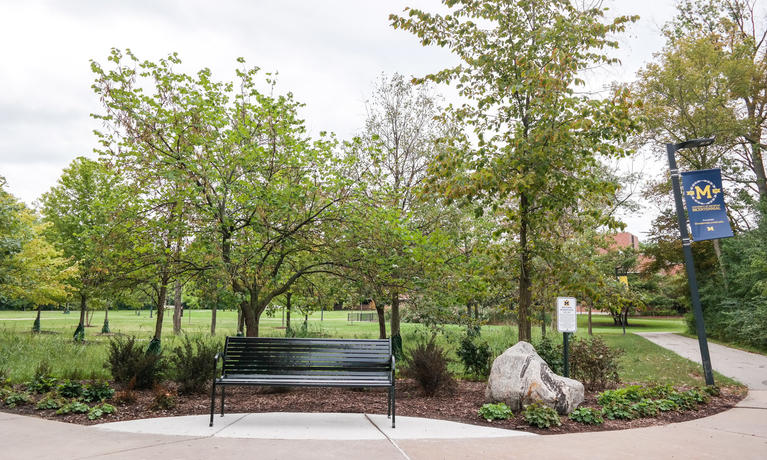 When plans for the Lot E4 parking expansion took shape, it meant that dozens of native trees — many of which were planted just a few years ago — were going to have to be removed at the site. Removed, or moved. Veteran grounds manager Keith Sudak hatched a plan to dig up 38 trees — some of which stood 25 feet tall — and replant them in an area along the western edge of the library where flooding had killed some of the campus’ oldest trees. Sudak and his team then complemented the newly transplanted forest with an understory of other Michigan grasses and wildflowers. This understory will attract all kinds of wildlife, including important pollinators like bees and butterflies. Grab a spot on the bench Sudak repurposed and installed at the northeast edge of the garden and take in the serene new surrounds. 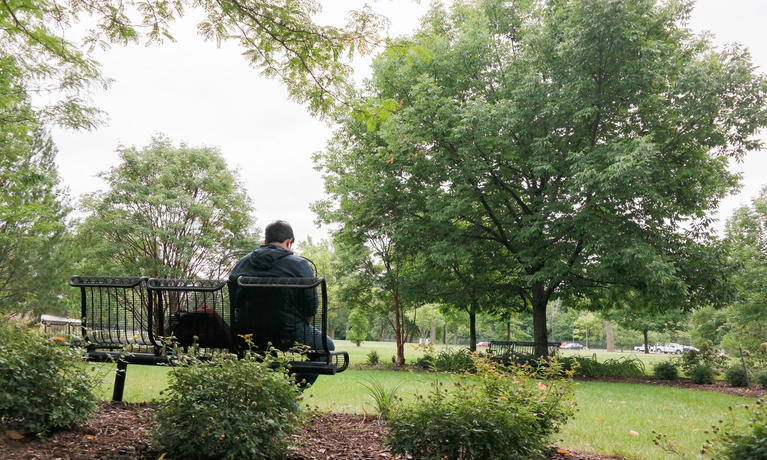 Another garden on the south end of campus was actually designed with serenity in mind. The “contemplative garden” on the far side of the CASL Building was originally built back in 2001 with a gift from retired UM-Dearborn Linguistics Professor Randee Sorscher. Her vision then was to provide a space to quietly enjoy nature — and honor her two grandmothers. “She wanted the garden done in blue, apricot and white,” says master gardener Jeanette Whiting, who helped install the original garden. “It was blue for one of her grandmother’s eyes, apricot for the other’s hair, and then white to tie the unusual colors together.” In the 17 years since the garden was built, though, Whiting told us it had become overrun with things that weren't supposed to be there. So this summer, with funds from Sorscher's original endowment, the garden got a major rehab to restore the original color palette. Surround yourself with the new salmon-colored roses, the violet-blue of butterfly bush and some late-blooming white daisies — and contemplate away. 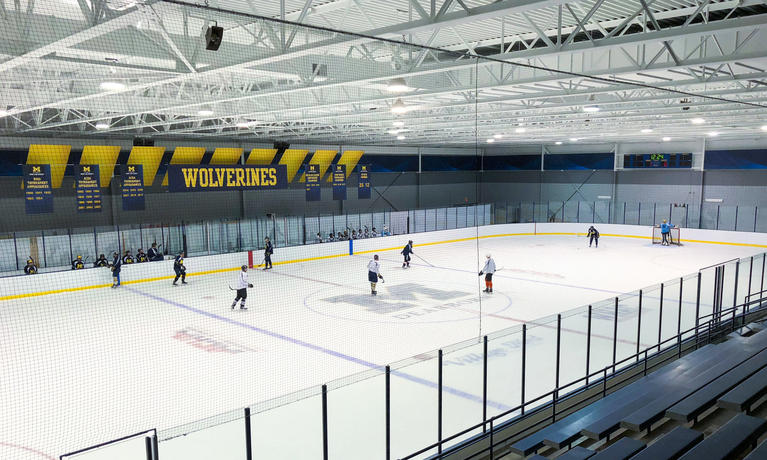 The UM-Fieldhouse got all new dasher boards and glass for the 2018-19 ice hockey season, which may not sound like a real game changer — until you realize that not all hockey boards are created equal. When a puck comes crashing into them, some boards act like brick walls, others, like trampolines; and hockey players have been known to use their insider knowledge of home boards to their advantage. Luckily, the men’s and women’s teams still have a few weeks to get acquainted with all the quirks of the new boards before the ice hockey season kicks off with the men’s home opener on Oct. 5. 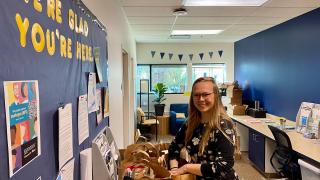 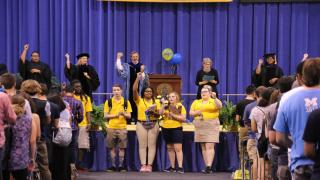 Nearly 30 people had a hand in physically transforming the Fieldhouse game-time space into a location for a warm Wolverine welcome....