COB graduate Bill Loesel invests in himself for his family's future

Leaving his past behind, William Loesel kept focus on his family and his future to reach his graduation goal.

Wearing his cap and gown, William (Bill) Loesel walked with his classmates down the Crisler Center aisle to his seat.

But even with everything going on around him—camera flashes, cheering and more than 1,000 fellow UM-Dearborn graduates—the 34-year-old was able to make eye contact with his 5-year-old daughter, Reagan, and wave.

That moment at April’s graduation ceremony let Loesel know that he had, against the odds, made it.

They were replaced with proud dad, college graduate and successful businessman.

“It all started with her,” said Loesel, talking about Reagan. “I knew if I continued on my path, I could have easily ended up dead or in jail. When I found out I was going to be a father, I realized my life needed to change. My kid deserved better than that.”

A cornerstone of his transformation was UM-Dearborn.

Always interested in entrepreneurship and business—as a child, he ran a profit-turning lemonade stand and sold Morley candy door-to-door to be his school’s No. 1 fundraiser—Loesel started researching undergraduate programs.

He said UM-Dearborn had what he was looking for: a strong business program, some online courses and supportive faculty with industry experience. It also came recommended by a longtime friend, Brandon Phillips, a former UM-Dearborn student and UM-Ann Arbor graduate.

“So many people didn’t think I was serious when I told them I was going to turn my life around. But when I told Brandon, he didn’t judge me. Instead, he said, ‘You can do this,’” said Loesel, who walked at the April ceremony but will complete his degree requirements in August. “He told me to aim high and to really challenge myself. So I did.”

Loesel, who’s taken a full course load each semester, now runs a small web-based vintage luxury watch business. He said advice from his College of Business classes helped him grow his business, which began as a hobby.

“I learned that I was being very American with the method I used to close deals, because I got right down to business. That doesn’t appeal to everyone, especially not international clients,” he said. “They want to know and understand you, and understand what you’re about; the business part comes second.”

Loesel said he now he engages in communication and building trust and relationships first.

“When my writing and communication improved, my business sales skyrocketed. I came here to become an international businessman, and I was able to accomplish that before I graduated,” he said. “I owe much of that to this university.”

Reflecting on his life then and now, Loesel said his transformation is almost unbelievable—even to him.

“If you would have told me five or six years ago that I’d graduate from a U-M school, I would have told you that you were nuts.” After a pause, he continued with a smile, “But here I am.”

And most importantly to Loesel, his daughter saw him succeed.

“Reagan knows her dad went to the ‘Go Blue!’ school. I’m now a part the University of Michigan. To be in that group, you have to earn it,” he said. “If I can accomplish this, anyone can. I can’t wait to see what is around the corner for me…for us.” 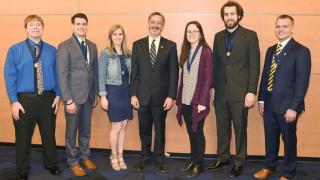 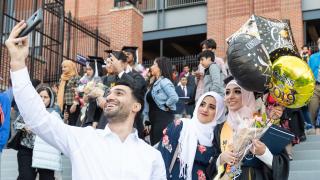