Crossing the great divide: How can a split Senate represent ‘We, the People’?

UM-Dearborn political science experts Nancy Kursman and Julio Borquez break down what partisan-split power in the Senate means for our country and how we can begin to repair political polarization.

The federal government was created to represent 'We, the People" — and  the U.S. population has a diverse set of ideals that run progressive, conservative and everything in between. So why are we so concerned about Democrats and Republicans having shared legislative power?

Voters have spoken through their ballots, but many — from Washington Post readers to FOX News viewers — wonder what an ideological split Senate means for the foreseeable future. UM-Dearborn political science experts Professor Nancy Kursman and Professor Julio Borquez break down what a partisan balanced Senate in the 117th Congress means for our country and how it could impact us.

Question: People are responding to a partisan-balanced Senate like it’s a bad thing. Is there an upside?

Julio Borquez: I suppose some pundits will tell you that the 50-50 balance will give moderates in both parties added visibility and leverage. That will put a premium on seeking practical solutions to pressing problems — some folks might see that as a pro. The flip side of the argument is that if moderates enjoy more influence, it is a recipe for timid, constrained policy response. Personally, I’m concerned it will lead to doing too little at a time where we need action.

Q: Where is action needed right away?

Nancy Kursman: When it comes to new legislation, the pandemic and the economy is job No. 1. Another stimulus package will be introduced early in the session based on remarks by Senate Majority Leader Chuck Schumer (D-New York), House Speaker Nancy Pelosi (D-Calif.) and by President Joe Biden. It’s expected to be championed by progressives and moderates. We’ll have to wait and see what exactly a new package would include, but there seems to be consensus on economic impact payments — even conservative Sen. Josh Hawley (R-Mo.) previously pushed for a $2,000 stimulus check.

Q: Since a super majority — two/thirds of the Senate vote — is needed to pass new legislation, does that mean things won’t pass if people vote based on party lines? Is there a way around that?

Kursman: Party-line voting has been at an all time high, meaning that there are few people who switch sides and vote with the opposite party. In 2021, there are a few senators who may be interested in working together. A group of centerists including Sen. Susan Collins (R-Maine), Sen. Joe Manchin (D-W.Va.),  Sen. Lisa Murkowski (R-Alaska) and Sen. Mitt Romney (R-Utah) helped broker the COVID-19 aid package. Hopefully, these four senators continue to use that model for the 117th Congress.

Also, there is immense power in using a legislative mechanism called “reconciliation” to pass legislation, as long as the bill is related to budgets or spending. This is how Democrats passed the Obamacare health reform bill — reconciliation bills only need 51 votes to pass. Sen. Ron Wyden (D-Ore.) will likely chair the Senate Finance Committee and he told reporters that reconciliation is definitely on the table. Sen. Bernie Sanders (I-Vt.) will be chairing the Senate Budget Committee and said he does intend to look at how reconciliation can be used to pass policies that go beyond traditional budget items and address “structural problems in American society.”

Borquez: Presidents also do not need cooperation with executive orders (which enforce a particular interpretation of an existing law). That is how the Trump administration pushed through controversial actions like environmental rollbacks and the travel ban. Since you don’t need to go through Congress, executive orders are easier to enact — but they are also easier to remove. (President) Biden has said his attention will be dedicated to undoing many of Trump’s executive orders. So executive orders are an option, but not the best one if you want a change to last.

Kursman: This split is more difficult because there is more partisan polarization than the last time this happened in 2001. In the past, each time we have had a split, we also had power-sharing, which is where top party leaders broker a negotiation. Power-sharing  differs from the way the Senate usually operates, which is done by way of unanimous consent agreements. These are designed to expedite work, provide some predictability and limit dilatory tactics. However, with the current political polarization, negotiating the terms of sharing power will be difficult. In 2001, it was different. Trent Lott (R-Miss.) — who was the Senate’s top Republican — worked out a deal with the then-Democratic leader Tom Daschle (D-S.D).

Q: Even with divided parties, we are all Americans — is there a way to get today’s Senate leaders to put the country’s needs first and power-share like in the past?

Kursman: That’s the million dollar question. The Senate leaders in 2021 have years of bad blood. The top Democratic leader is Chuck Schumer (NY) and the top Republican leader is Mitch McConnell (KY).  These two men’s disagreements go back to President Barack Obama's proposed nominee Merrick Garland for a Supreme Court justice vacancy in 2016. The relationship hit a low in 2020 when McConnell refused to negotiate directly with Schumer and Speaker Nancy Pelosi (D-Calif.) after the coronavirus pandemic hit and Congress hurriedly put together the $2.2 trillion CARES Act. Schumer and McConnell talk to each other much less than Lott and Daschle did 20 years ago.

Several staffers who helped Daschle and Lott work out their power-sharing agreement are still in the Senate working for the current leaders, which could be beneficial. However, the central point is this: The success of any Senate agreement depends in part on how well members can adapt to changing circumstances, and the incentives for the leaders to work together.

Q: We keep hearing about this divide in our Senate and House. Can we — the people on the ground — do anything to repair it?

Kursman: We need to demand that Congress reform the campaign finance laws to increase transparency and decrease the reliance on dark money and Super PACs to win elections. Members run for Congress aided by opaque outside groups who push legislators and policy away from the moderate middle. Members are constantly worried that they may be “primaried” for taking a cooperative stance, and that is one driver of the polarization.

Dealing with this problem will come down to changing the role of election money and the incentives that drive behavior. Most people are disgusted by the role money plays in elections from the federal to the local level — whatever their political stripes may be.

Borquez: My initial hope for 2021 was that it would be thoroughly boring, but that’s already out the window. In the near term, my hope is that the GOP can move beyond simply being a Trump vessel. What happens in the next few weeks — on impeachment, on economic relief, on pandemic response — will depend to a large degree on the extent to which Republicans in the House and Senate are willing to step up and legislate. I’m not trying to be overly partisan here — if American politics is to regain some measure of health, it will require two healthy parties.

Kursman: I hope many things for this new Congress, but much of it depends on how the American people decide to relate to each other and how we deal with critical issues such as ensuring our health, safety and the economy.  It must start with us. We, the people, need to find a way back to civil discourse and respectful disagreement, and minimize the influence of people who benefit from conspiracy theories, disinformation and sow distrust of government. I am reminded of the story of Elizabeth Willing Powel, who asked Benjamin Franklin what the Constitutional Convention had created. He remarked,  “A democracy, if you can keep it.” We need to engage in the hard work of keeping it. 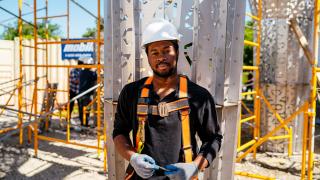