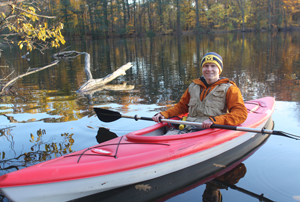 Ryan Keeling unhooked his depth finder and leaned over the edge of his red kayak, peering into the brisk waters of Fair Lane Lake.

He lowered the yellow device below the surface and waited a few seconds for an accurate reading to appear.

The University of Michigan-Dearborn senior then pulled out a handheld GPS to map out his geographic coordinates.

Last fall, Keeling boarded his kayak and measured the lake’s depth in 300 different spots. His mission was to determine the lake’s bathymetry, or underwater relief, and how it has changed over the past century.

That same curiosity led Keeling to the Benson Ford Research Center in Dearborn, where he sifted through archival records and historic aerial photographs of Fair Lane Lake. Using his knowledge of Geographic Information Systems, or GIS, obtained through UM-Dearborn’s Geospatial and Mapping Certificate program, Keeling was able to comprehend the information he collected.

“Being able to relate these historical documents to one another with GIS is really powerful because they all share the same geographic footprint,” said Keeling, an environmental science major. “GIS greatly assists in change detection.”

Documents related to Fair Lane Lake date back to 1914, when Jens Jensen was contracted by the Ford family to map out the estate’s landscape architecture.

Over the past century, the lake’s underwater makeup has remained a mystery. That’s what inspired Keeling to take on this particular research project, as part of an independent study administered by Jacob Napieralski, associate professor of geology.

“He seeks out opportunities rather than waiting for them to present themselves,” said EIC Director David Susko, who hired Keeling as a student naturalist. “When you have a student like Ryan who can make things happen, you have to grab a hold of that person and give them encouragement and foster their development. I just stand back and let him be creative.”

Keeling’s research shows that Jensen’s plan for Fair Lane Lake called for a maximum depth of 13 feet. The current maximum depth, according to Keeling, is less than eight feet.

A number of factors can justify the depth changes, including accumulation of sediment and bank erosion.

Keeling’s research will be used to augment future management decisions of Fair Lane Lake, in respect to the original goal of Jensen and Ford, which was to provide a healthy environment for native plants and animals.

“There are many disparate studies going on right now in the natural areas, and Ryan found something that no one else has looked at,” said assistant research scientist Justin Saarinen, who also advised Keeling throughout his investigation. “The question is how do you bring them together so you can have a coherent set of stories?”

Saarinen and other scientists across campus will continue to tackle that question in the coming months. Meanwhile, Saarinen plans to publish Keeling’s maps, along with other research involving the natural area, on the EIC website.

“If you’re going to develop a landscape management plan or any future habitat restoration plans, one of the first things you have to do is understand what you have,” Susko said. “Once you know what you have, you can start to imagine what to do with it. By tapping into student projects to help us complete those first steps, we can be more prepared to make future management decisions.” 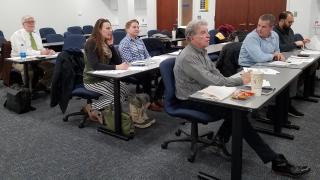