The low-maintenance permaculture orchard and garden is growing fresh produce—for a good cause. 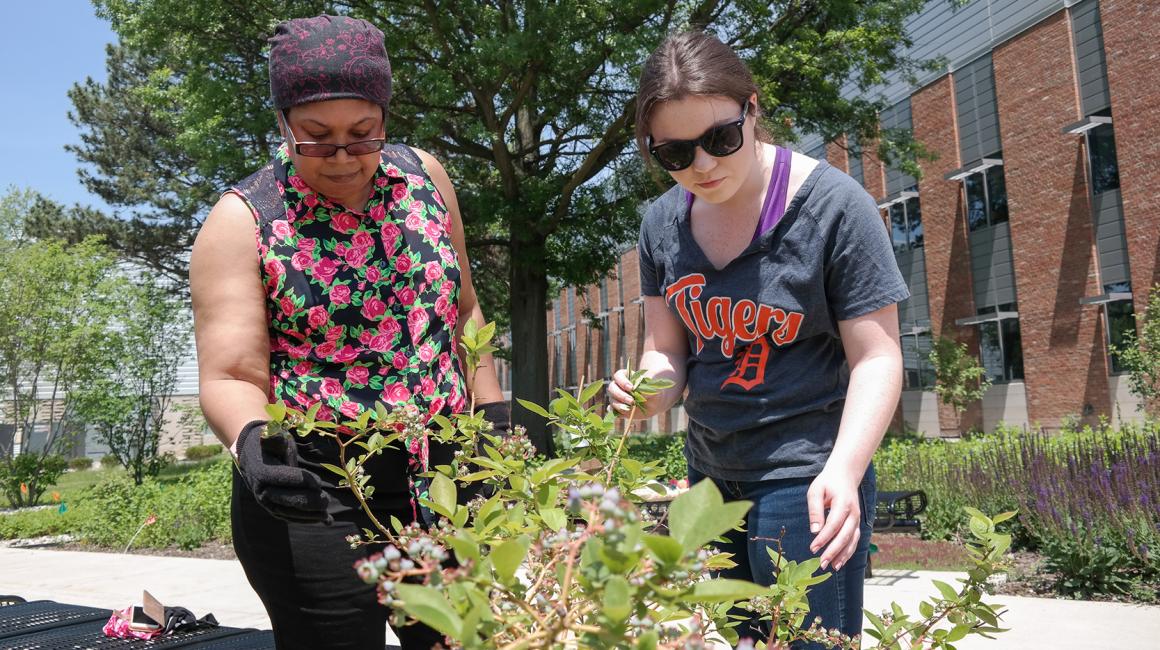 UM-Dearborn students Fannetta Watson and Ashleigh Schoeninger are among the student volunteers who are lending a hand to the university’s permaculture orchard this summer.

It’s probably not such a bad thing the on-campus orchard and garden is tucked along a less-traveled stretch of sidewalk on the east side of the Natural Sciences Building. After all, if it had been located within picking distance of a major campus thruway, it’s easy to see how the apples, wild strawberries and blueberries might succumb to an everyday gauntlet of faculty, staff and student foragers.

While some grazing might be inevitable, Director of Facilities Planning Kate Pepin expects most of the produce to reach its intended destination: the UM-Dearborn Student Food Pantry.

And though it may be a few years before they’re collecting big-time harvests for students, she and a team of volunteers who help maintain the garden have designed the site with longevity in mind. Unlike most gardens in northern climates, which typically rely on annual crops that are harvested through the summer and fall, this orchard is built on the idea of permaculture—an approach to agriculture designed around sustainability and self-sufficiency.

For example, Pepin and the team have chosen a balance of plantings that favors lower-maintenance edible perennials. They sometimes take a few years to get established, but they’ll produce year after year without need for replanting. The blueberries are one of those crops, along with the cranberries, ginger, a cold-tolerant variety of kiwi, and several kinds of apples. Underneath the branches of the latter, there’s also a thick mat of tenacious wild strawberries, which they’re planning to complement with an everbearing variety this year. Pepin said that kind of “layering” is another hallmark of permaculture plantings and allows them to grow more food in less space. 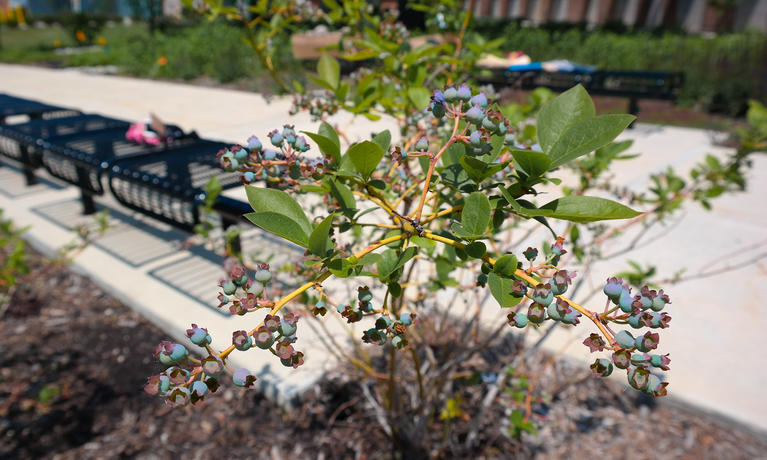 Throughout the garden, you’ll see another key permaculture principle on display—companion planting—which clusters crops that like living side by side.

“When we plant garlic this fall, it will be next to the roses because garlic and roses grow well together,” Pepin explained. Those roses are edible too; as are the hibiscus and violets they’re planning to add to the garden this summer.

As the garden fills in, so are the ranks of volunteers and staff who are lending a hand. Pepin said Jeanette Whiting, UM-Dearborn’s veteran master gardener, has brought her effort and expertise to the project and helped shepherd the garden through that critical first year. And this season, a small group of students is pitching in to handle summer weeding, watering and harvesting.

“For me, as a political science major, one of the things you study is environmental issues and sustainability,” said senior Ashleigh Schoeninger. “So it’s pretty cool to see a real example of that. I think everyone should have access to food that’s not contaminated with pesticides and toxins.”

Volunteering at the garden was personal for health policy studies senior Fannetta Watson. Last year, she decided to leave her job in order to make time for her studies, and the student food pantry helped fill in some gaps when money got tight.

“I’d walked past that area before, and I never even knew that was a garden,” Watson said. “But when Kate [Pepin] explained what was going on there, I was really excited to do something. That little bit of space can feed a lot of people.”

Pepin and the team aren’t expecting a super bountiful harvest for at least another year or two, but as the garden matures, she hopes it can indeed add a meaningful amount of hyper-local fresh foods to the shelves of the student food pantry. And if you’re a tempted forager, there’s still a way for you to have a taste. Pepin said a little grazing is an assumed perk for anyone who helps with the harvest. 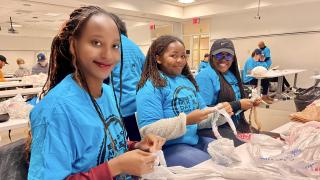 The MLK Day of Service hosted nearly 400 volunteers who served at 10 sites at UM-Dearborn and in the community.... 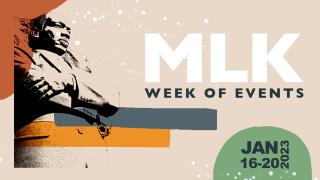 Celebrate the life and legacy of Martin Luther King Jr. 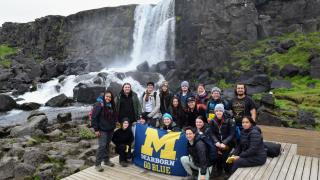 Learning the world through experience