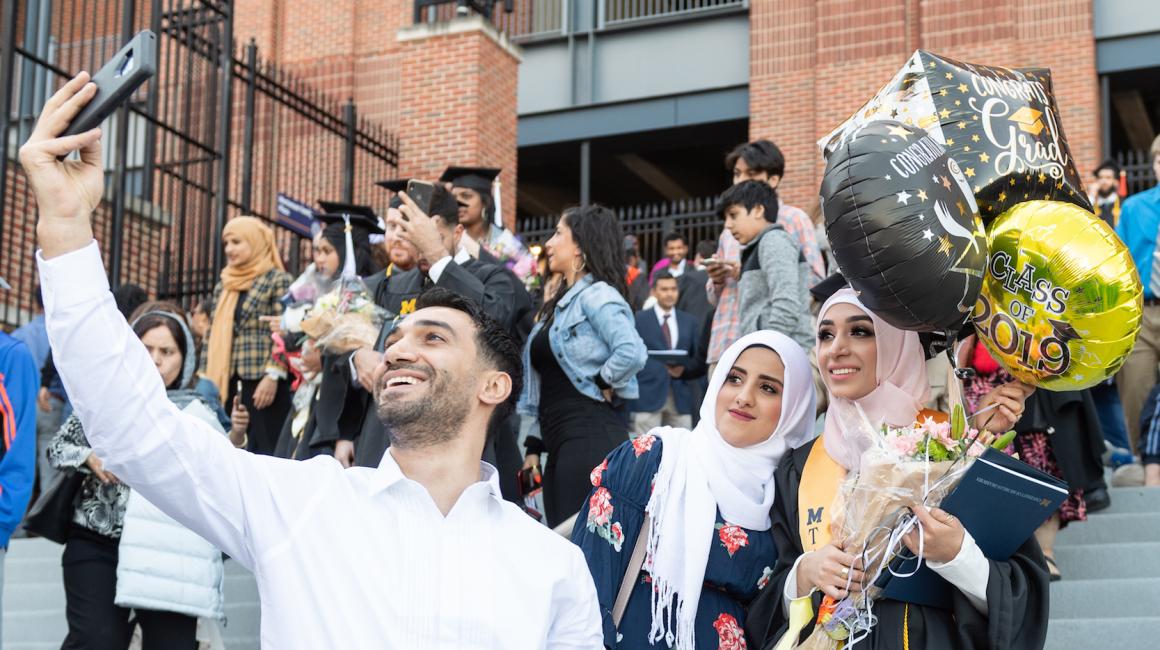 This article was originally published on April 28, 2019.

Success in life is all about meaningful discovery.

“On a fateful day in 1970, Tony England was called upon to use all his education, creativity, and native abilities. [In Apollo 13] Tom Hanks uttered the most famous lines in movie history, ‘Houston, we have a problem’," Grasso said. "That’s when our own Tony England sprung into action. He's a major part of the team who designed and help implement…what saved the Apollo 13 crew.”

But England spoke about more than his NASA experiences and exploring the final frontier; he was speaking to graduates about the possibilities in front of them as new UM-Dearborn graduates. 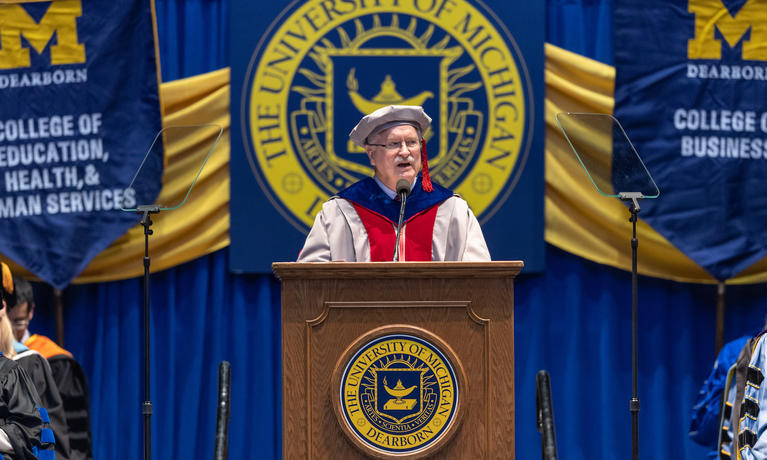 “The Apollo grand challenge not only yielded new technologies and a new understanding of the moon and, by inference, the planets, it showed that we humans could organize to achieve great things. ‘If we can go to moon, we can …’  You fill in the blank,” England said to the enthusiastic audience at Crisler Center. “I hope the aspirations of some of you include the blank of addressing today’s grand challenges of reversing climate warming, and overcoming the reemerging tribalism that threatens democracy and world peace.”

Listening to England share his experiences of going from a small-town high school — as a running back on his school’s football team, he once marched in the band at halftime —  to NASA, the 1115 new alumni were given three keys to success when pursuing your goals: Confidence, value alignment and a strategy.

“For me, my NASA experiences and academia have allowed me to pursue my passions for adventure, discovery and teaching.  Your degree will enable access to a satisfying career, but you need a plan.”

England, one of the first scientist astronauts, said he had to prove himself to Rear Admiral Alan Shepard  — the first American in space — because only military men had involvement with the space program prior to their arrival. He said the astronaut office viewed scientists as “pipe-smoking oddities having unruly hair and wearing baggy tweed jackets with leather patches on our elbows.” 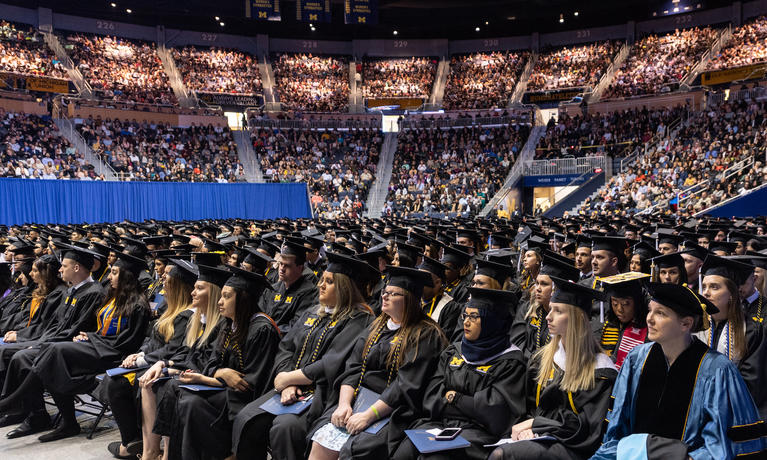 But after succeeding in flight school, survival school, underwater school and more, NASA began to see the eight men differently.

England said the growth came from dedicated effort, one that was managed through thinking of his astronaut goal as a series of small steps — “a purposeful walk in a desired direction,” much like the educational journey the recent graduates just took.

“Each semester and each problem you solved moved you incrementally closer to the goal of understanding, filling your toolbox of professional skills and graduating,” England said.

New graduates — listening in earnest to England — clapped and cheered for his contributions and advice. Many of them had customized graduation caps with sayings: “Follow your dreams, they know the way,” “Teaching is a work of heart,” and “Wherever life plants you, bloom with grace.” 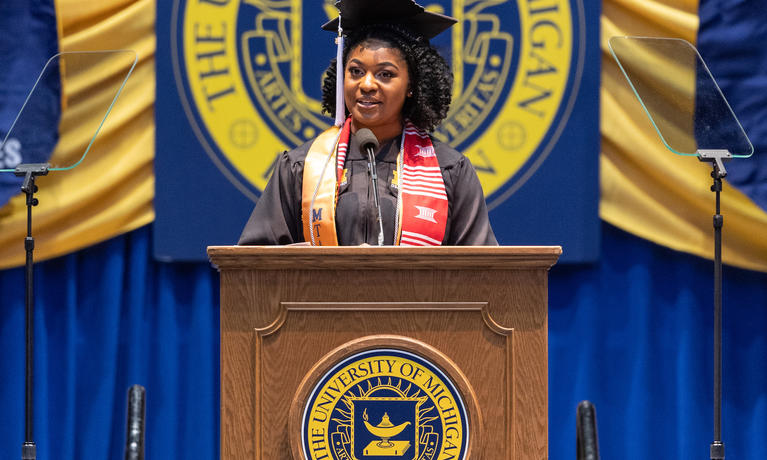 Surrounded by maize and blue ceremonial items — along with poster-sized photos of her, held up by her family — Hollier-Jackson said it’s important to celebrate the new degrees earned. But it’s also essential to realize it’s not the finish line.

“Today signifies the day that we accept our call to action,” she said. “The call to go out into the world and become leaders of our world — the leaders our world needs to change the lives of the next generation. This is not the end. Instead, it’s a new beginning.”

Looking out into the crowd — filled with both new and familiar faces — Hollier-Jackson said she was living a moment she’s envisioned since a child at family graduations.

“I remember people who were finishing school and giving powerful speeches and thinking, ‘I want to do that.’ Humbly I stand on this stage not for myself but for my little cousins, your little cousins, daughters, sons, nieces and nephews who are thinking of their futures and will now think, ‘I want to do that,’” she said. “You never know who is watching you and you never know who you’ll inspire. So always remember to make the best of every moment.”

Sunday’s ceremony included recognition of six students who were honored as Chancellor’s Medallion recipients for their academic accomplishments, quality of character, intellect and integrity:

If you were unable to attend, you can watch the archived live stream feed of the ceremony and view graduation photos. 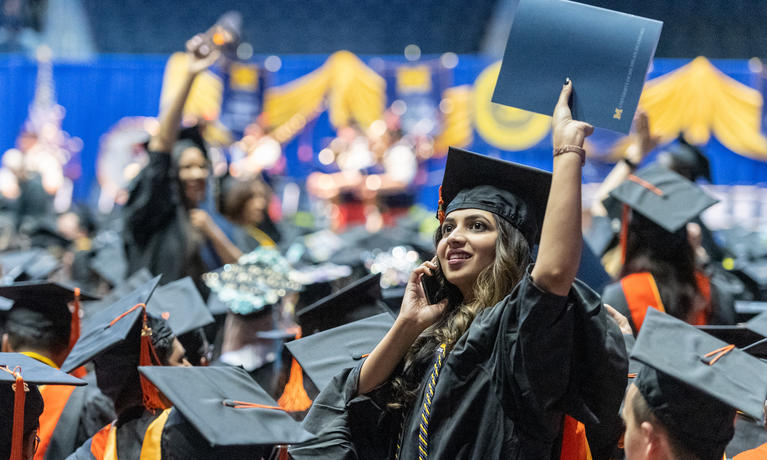 Samer Alfahad, a marketing major and first-generation college student, said his College of Business lessons gave him the foundation needed to help launch a nonprofit organization, design and create websites, develop a strong network and more. ...