How two UM-Dearborn students are advancing their activism 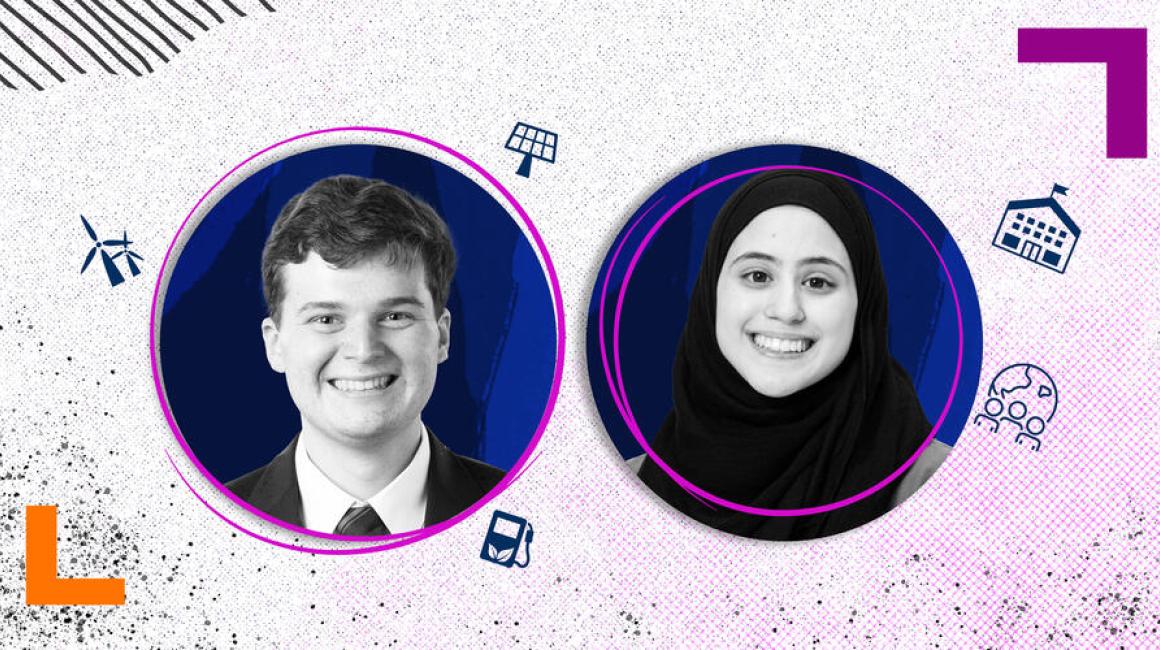 When we talked with senior Amanda Saleh and Daniel Arini (BA ‘21) last semester, they were just beginning their United Nations Millennium Fellowships, but we were already looking forward to chatting with them for a follow-up. Both had some pretty cool plans for their semester-long fellowships, which support undergraduates working on projects that advance the UN’s 17 Sustainable Development Goals. Saleh, a campus activist who’s worked in areas like international relief and educational equity dating back to high school, was throwing her effort into building out the UM-Dearborn student chapter of buildOn, an international nonprofit that mobilizes U.S. students for school construction in lower-income countries. Arini, who’s done some pretty interesting things himself — including authoring a climate resilience report for the City of Dearborn — planned on creating a crowd-sourced online museum to tell compelling environmental stories and help global activists discover untapped common ground.

When we caught up with Arini to see how the museum was going, he said it was “ramping up” more than “wrapping up” —  which is to be expected from an ambitious project that requires everything from vetting software platforms to attracting a base of global participants. But in the four months of the fellowship, he says he’s been able to chip away at a lot of important foundational work. He’s recruited a few other UM-Dearborn students to join the effort (anyone can join the museum) and zeroed in on software that will provide the kind of interactivity he wants the museum to have. On the latter front, he says Laura Cotton, the art curator and gallery manager at the Stamelos Gallery Center in the Mardigian Library, has been a huge resource for understanding what’s possible in the online museum format, which has grown a lot during the pandemic. To test-drive the museum, he also created some pilot galleries focusing on the recent historic flooding in Detroit. (To see them, check out “Room One: Flooding Causes,” “Hallway: Intersections,” and “Room Two: Flooding Solutions.” Arini says Courtney Wagner and Charmaine Williams were a big help putting the galleries together.)

Saleh spent a fair amount of initial energy on recruitment as well. Starting a student organization is a lot of work, especially during the pandemic, but she was able to recruit a now nearly full leadership team in just a few months. After that, the group set their sights on fundraising. The way buildOn works is that students who go abroad for school construction campaigns have to each raise $2,000 for the project. By the end of the fall semester, UM-Dearborn buildOn had raised more than $4,000, enough for two students to travel to Guatemala to build a school, likely this summer. (Between now and then, they’d like to raise additional funds for a third student. You can donate here.) In addition, they’re looking to cultivate some partnerships with Detroit-area nonprofits, so they can throw their weight behind local educational equity efforts.

Both Saleh and Arini give the fellowship experience pretty solid marks. As motivated activists, both said they likely would have pursued their projects without the fellowship. But the leadership training the program provided definitely gave them some different perspectives on things. Arini noted that the six fellowship sessions often went beyond commonplace skills like “how to give a presentation.” In particular, he said they spent a lot of time thinking about how to talk with constituents and organize campaigns that directly reflect their priorities — rather than goals set by an outside organizer. That resonated with Saleh, and the mission of buildOn, as well. “I think in development work, we do need to be intentional with what we’re doing and who we're working with,” she says. “There’s a danger of objectification in the social impact sector, and the people in their communities know what’s best for them. They’re the experts, and we’re just the sidekicks of the work.”

This was actually the first time students from any of the University of Michigan campuses have participated in the UN Millennium Fellowship program. (Arini and Saleh’s cohort also included six students from the Ann Arbor campus). Some good news for students interested in following in their footsteps: Applications are now open for the 2022 fellowship. Undergraduate students can apply now.