Life behind and beyond the prison wall

For 15 years, the Inside-Out Prison Exchange program has encouraged UM-Dearborn students to think about crime and punishment mechanisms in human terms. 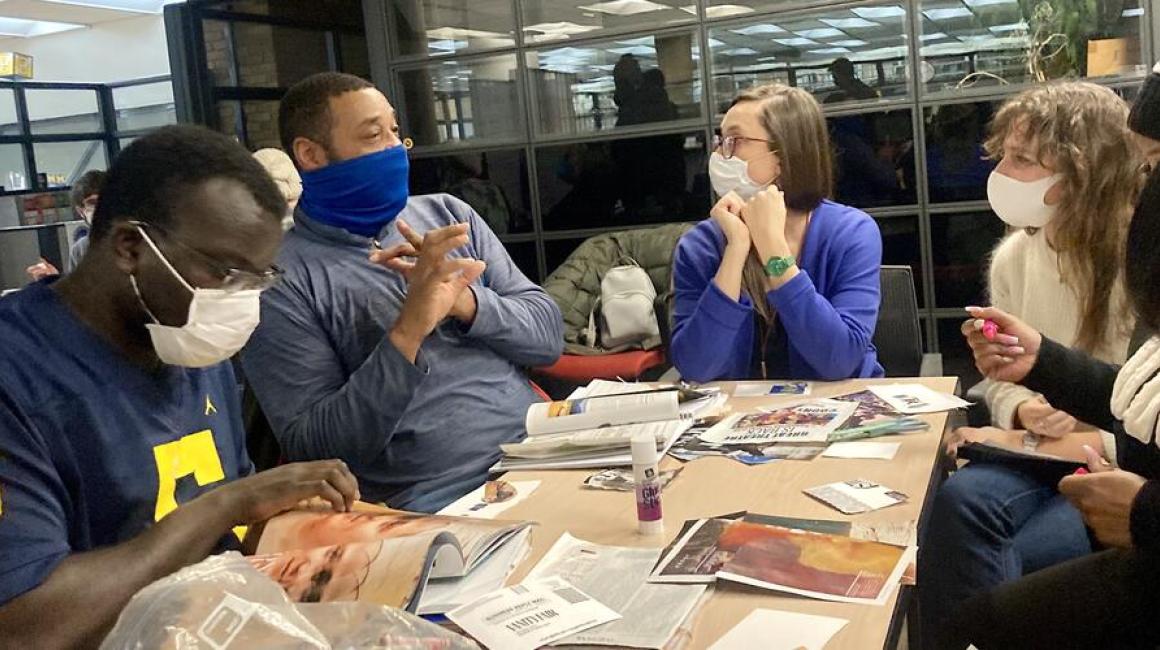 Students in a UM-Dearborn course are putting on an exhibit that features a variety of artistic expressions in an effort to foster dialogue about social institutions. They’re creating a publicity plan for a concert that gives inspirational messages to young people. And they are organizing a springtime BBQ picnic that will connect law enforcement and community.

And it’s all in the name of helping people see humanity in one another — especially when it comes to people who are, or have been, incarcerated.

The Inside-Out Prison Exchange course is a class of 20 students led by Sociology Professor Paul Draus and History Associate Professor Anna Müller. The class meets weekly to discuss a variety of topics that includes the origins of imprisonment and the construction of social order and has students reflect on the effects that incarceration has on society outside of the prison walls.

To do this in a real way, students are connected with people on “the inside” to hear about their experiences — both before and during their time in prison. Previously, the class went to the Macomb County Corrections Facility to have guided interactions with the convicted men. But due to COVID reasons, the class needed to change formats.

“When the option of going into the correctional facility was no longer available due to the pandemic in early 2020. Then the protests over the George Floyd murder began happening. I thought that we need this program more than ever to have important conversations. It needed to continue,” Draus said.

To create space to hear some of their voices, students are reading articles from the Hamilton American Prison Writing Archive, they are speaking with adults who have transitioned from prison to civilian life, and they are completing class projects like putting on exhibits, concerts and conversation-based meals. First, in the early days of the pandemic, the project-based learning course met via Zoom. But now, the students come together on campus.

“We had to pivot because of the pandemic, but it has really worked,” Müller said. “The class attracts students with a variety of interests, not just criminal justice. It works because we’ve kept the focus on what we can do to create change in a real way.”

For example, each student will work on a community-centered project that will be completed by the end of the term in April. There are four that the class is working on:

• Helping the Macomb Theory Group — a group of men at the Macomb County Correctional Facility channeling thought and emotion into creativity — plan an exhibit of their art at Oloman Café in Hamtramck. There are many talented artists in the group — like Steve Hibbler, whose work has been published in Harper’s Magazine (October 2019).

• Promoting a concert for the Chamber Music Society of Detroit that’s devoted to juvenile lifers without parole.

• Planning a springtime picnic with community members and public safety officers with the goal of fostering conversation and camaraderie.

UM-Dearborn senior Penny Kane isn’t enrolled in the course, but comes weekly to assist with a project  — she’s helping with the art exhibit — and to share her experiences as someone who served time at the Women’s Huron Valley Correctional Facility, where there is an Inside-Out Program run through Eastern Michigan University. During the progression of the class, Kane noticed how the students’ demeanor toward her changed. She said during the first week students were paralyzed by fear to interact with her. By the last week, the students were smiling, laughing and joking.

“A class like this really makes a difference because it helps you see what an incarcerated or formerly incarcerated person looks like. I think it’s surprising to some people to see that I’m a daughter, writer, student and friend. Yes, I’m also a felon. I'm very open about that. But prison gives you time to think and reflect about what you’ve done and the changes you want to make.”

There are approximately 2.1 million incarcerated people in the U.S. prison system. And each year, more than 600,000 individuals are released from state and federal prisons. Kane said with these high numbers, there are many free people still imprisoned by the social stigma of “formerly incarcerated.” And she hopes that class like this one creates a bridge for understanding.

“If the time has been served and the person is seen as being rehabilitated to the point that they are walking freely on the streets, why aren’t we allowing them to do more than get a poverty-level job or live off the government, which may put them back in a similar position as before? If someone has the drive to make changes in their life, they should be given the chance,” she said, noting that poverty is the No. 1 predictor for recidivism. “I hope conversations like the ones that happen in this class can help take away some of the fear people have and remove the social stigma that exists.”

To help make real connections to open doors for open conversation, the class has a written dialogue with the Macomb County Correctional Facility Theory Group. For example, the men in the Theory Group wrote poems to introduce themselves to the class. In response, students wrote similar introductory works and sent them to the prison. Read some of the student and Theory Group "Who I Am" poems.

Having attended several of campus’ Inside Out sessions, Kane said Draus and Müller are skilled at listening to class conversations and extracting the teachable moments. For example, when talking about labels, Draus and Müller asked the class: “What should we call people who are in prison or who were formerly in prison?”

Students looked around the room at each other. After a pause, a few waged a guess: “convicted felon,” “prisoner,” “inmate.”

Then Bryan Jones — an accomplished musician who works for Chamber Music Society of Detroit — spoke up, “Whatever you do, please don’t see them as just a number. They have names. They are people.”

Jones would know. For a crime he committed as a teen, Jones served 31 years in prison. Now out, he’s earned his college degree, landed a full time job, frequently volunteers for nonprofits and recently bought a home. But it wasn’t easy — that robbery from the 1980s followed him even after his release because of the criminal history questions on job applications, rental agreements and college applications.

“I was lucky that I had a love for music. Music helped people view me as a real person. When I was in prison, I ended up connecting to employees there because I could play the piano and I liked composing. I became associated with that and they began to realize that I’m more than a number,” he said. Jones said if it wasn’t for music opening doors to connect him with prison officials, re-citizenship would have been exponentially more difficult. He said some of the prison staff helped him get re-established after he was paroled, like a corrections officer who later became his landlord. Jones often comes to campus’ Inside Out class to share his story and serve as a mentor.

Criminology and Criminal Justice Studies senior Senita Wilks sat across the table from Jones. Wilks said she took the class to get a deeper insight into the conditions inside of a prison, hear personal experiences from people who have experienced living in one, and learn what she can do to help people stay out of one.

Wilks, who formerly worked as a prison corrections officer, plans to attend law school after her Spring 2022 graduation. She wants to be a defense attorney who takes pro bono cases.

“I know a few people who have been convicted or went through the system in some sense. They couldn’t pay to retain their own attorney, and that could have made the difference in their outcome,” said Wilks, noting that court-appointed counsel is often overworked and underpaid. “It’s important that our justice system realizes that these are real people with real lives. They deserve due process and they deserve to have people recognize that change is possible.”

And that’s the overall goal of the Inside-Out Program — showing that change is possible on both sides of the prison wall.