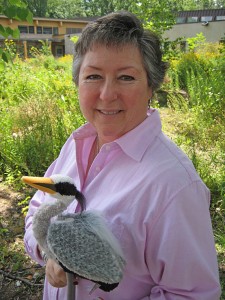 McLeer, who serves as co-chair of the International Wildlife Refuge Alliance’s stewardship and education committee, received the volunteer appreciation award in recognition for her “dedication and selfless donation of time” while participating in the educational programs conducted at the Detroit River International Wildlife Refuge for several years.

“I was completely surprised and humbled by this recognition,” McLeer said.

Earlier this year, McLeer received another countrywide honor when the National Association for Interpretation (NAI) named her as its Great Lakes Region Meritorious Service Award winner.

The NAI is an association for professionals involved in natural and cultural heritage interpretation in settings such as zoos, museums, parks and nature centers. Through its awards program, NAI recognizes outstanding achievements of NAI members working to advance the profession of interpretation.

“We are extremely proud that Dorothy has been recognized by NAI with this honor,” said David Susko, director of the EIC. “Dorothy has a long track record of community outreach and civic engagement through the EIC, so we are pleased that her peers have decided to reward her efforts.”