The annual holiday tradition brings together students from multiple countries and all walks of life. 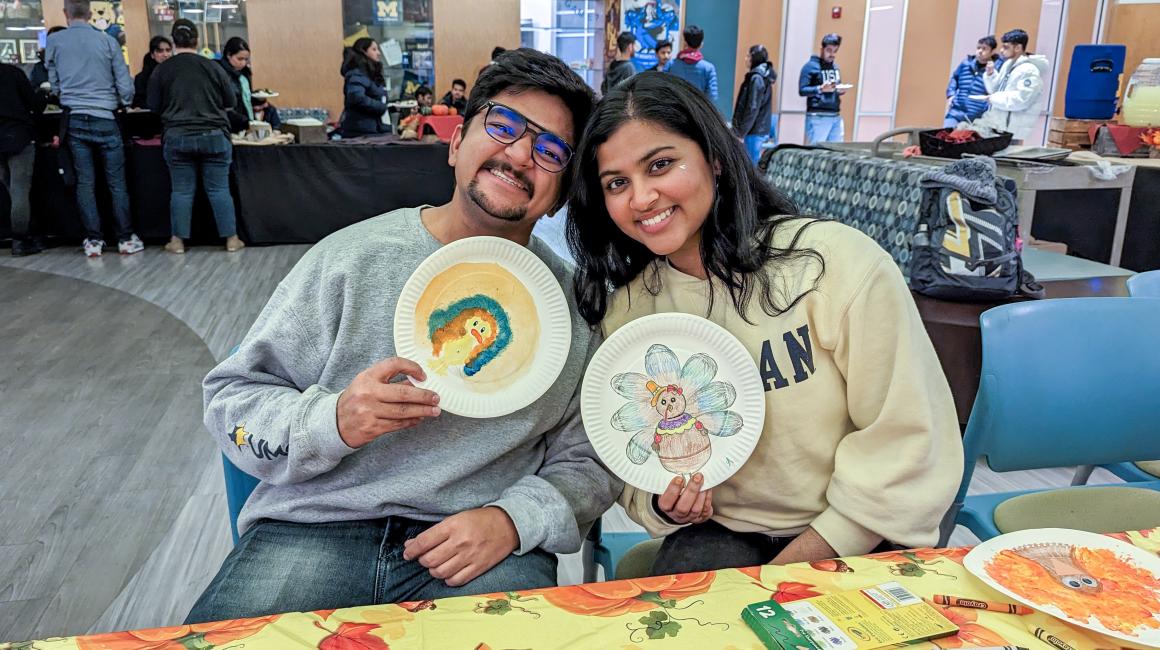 These days more than ever, Thanksgiving traditions come in all shapes and sizes, and UM-Dearborn’s annual Friendsgiving dinner is one of our favorite examples. This year, the Thursday-before-Thanksgiving event drew a crowd of around 100, including dozens of international students looking to experience the traditional Thanksgiving menu, folks with families in other states who weren’t traveling home, and locals who just wanted to make new friends. Our student editorial assistant Rudra Mehta dropped by and collected these stories about what the day meant to six students.  A big thanks to the Student Activities Board and the Union at Dearborn for organizing the event. 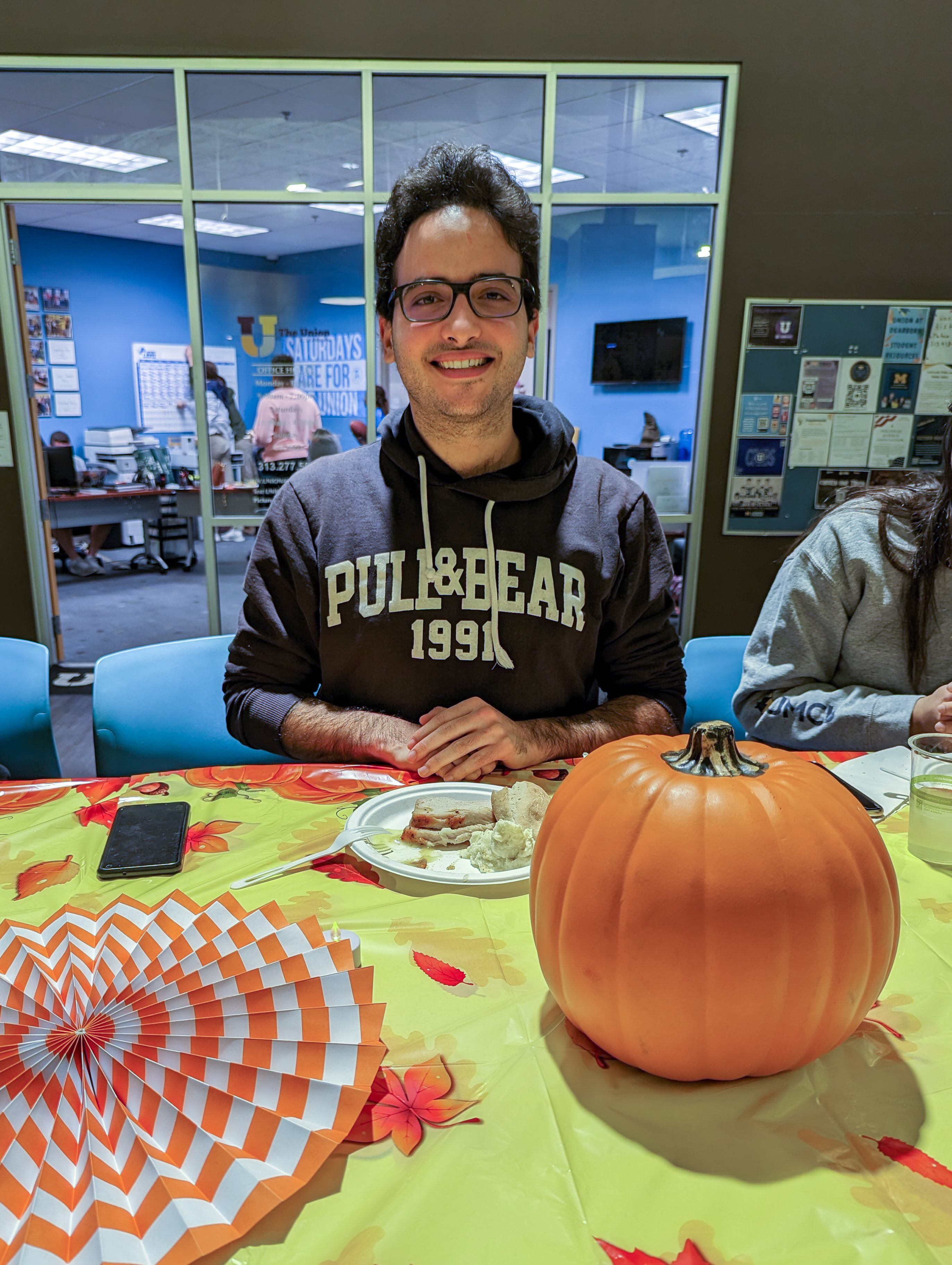 “I thought it was just about the turkeys!” Kaboudi says, laughing. “Since I am from Tunisia, my impression has always been families getting together and trying to have a lasting moment, and now I’m here experiencing it for the first time. I figured out that many people here are actually foreign students, and their families may be far away, but that does not stop them from gathering around and having fun together. It's honestly amazing. As a foreigner, I think this is important for all of us.” 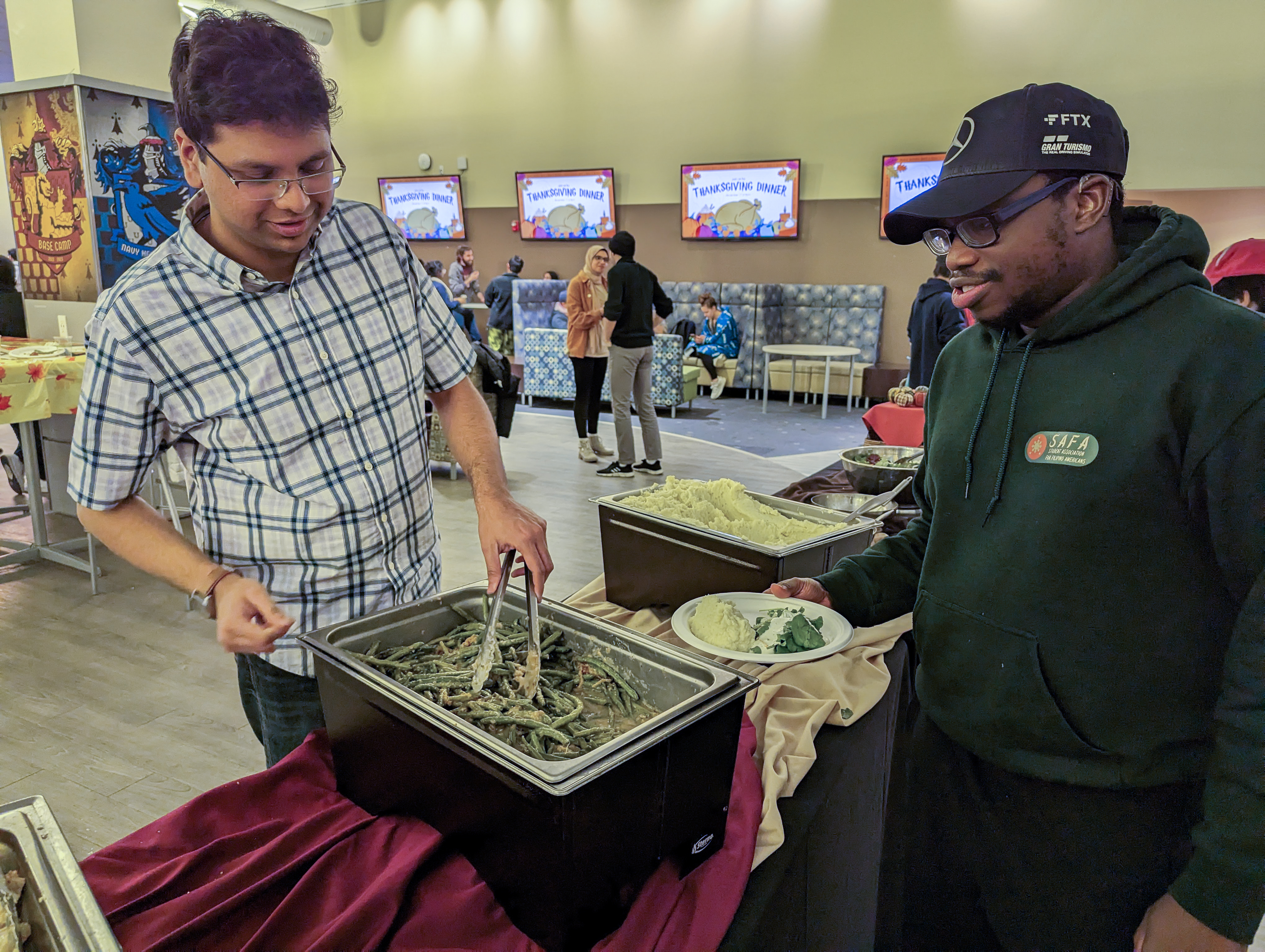 “For my first-ever Thanksgiving, I knew nothing about what it stood for. Compared to last year now, I somewhat understand Thanksgiving, if not completely,” says Khambete (pictured left). “The reason why we celebrate and the familial spirit, especially this year, is fun because now I can interact with people knowing what it is and talk more about it. To the people who are new to this, I can tell them about it! Something I definitely appreciate about the festival is the food. Plus, it’s a break from our studies!” 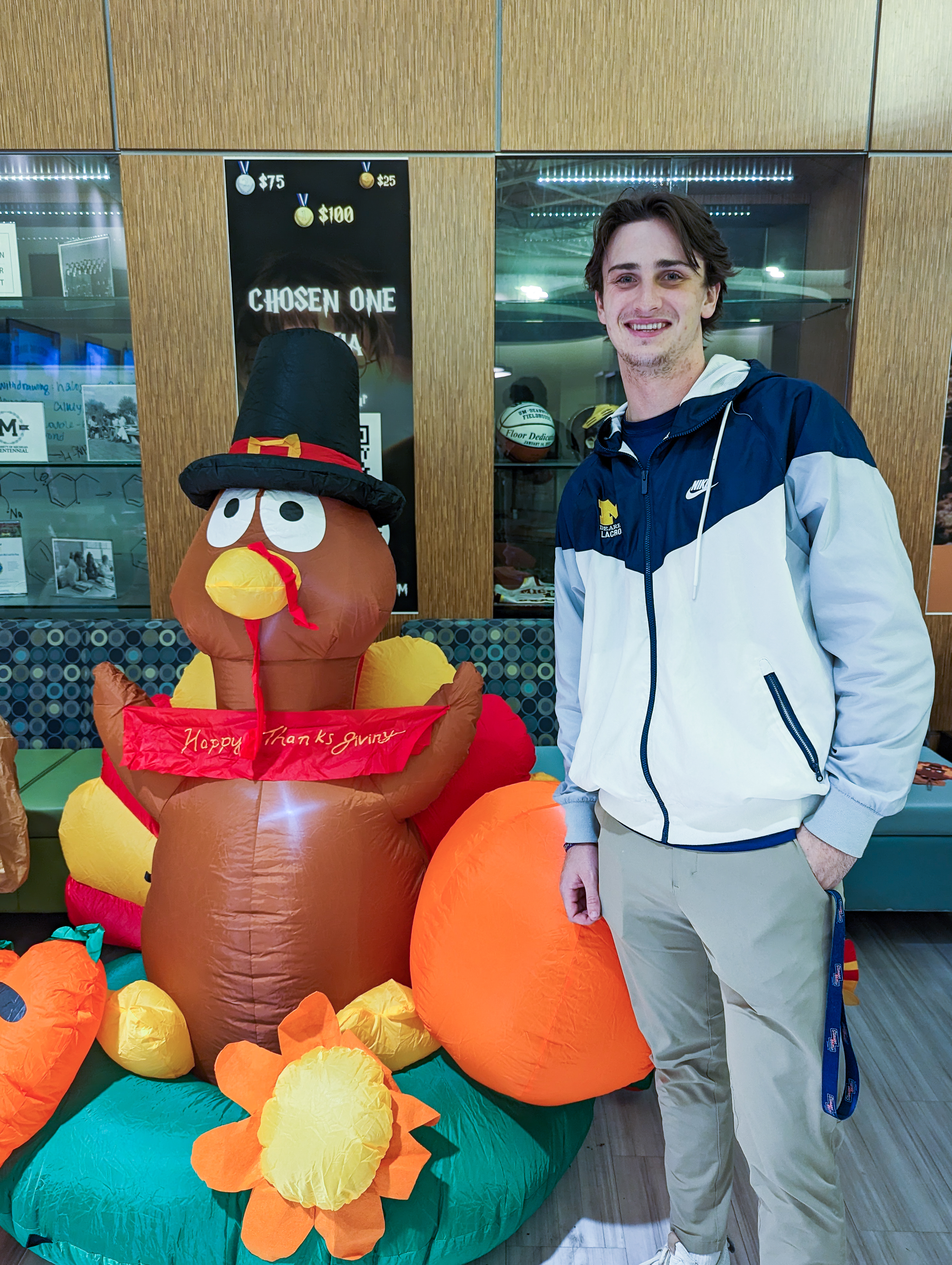 “Thanksgiving dinners have been different compared to the Friendsgiving we just organized. My family is pretty small and spread out around the country. So it's hard to get us all together in one place, but when we do, it's intimate and sentimental,” Atherall says. “But with Friendsgiving, especially at the university, there are so many kids that you make friends with, and it's a great chance to sit down with everybody and interact with everyone. Especially if I don't have the chance to go home [to California] during that holiday season, it definitely helps bridge the gap and keep that sense of connectedness there.”

“I think it’s one of the best parts about being at UM-Dearborn, especially as a commuter campus, because we have students from all parts of the country and the world. I think traditional Thanksgiving can be a little more formal, having everyone dressed up and waiting until everyone gets their food to eat. Here, it's a lot more laid back. I'm here wearing my hoodie right now!” Caruso declares proudly. “Everyone's just got out of classes, and so I look at ours more about relaxation. For me, it is all about giving appreciation. For years, every Thanksgiving, my whole family would go to a food bank called ‘The Feast of Giving’, and we helped volunteers give meals to people that didn't have food that day. It's about appreciating things in your life and giving thanks.” 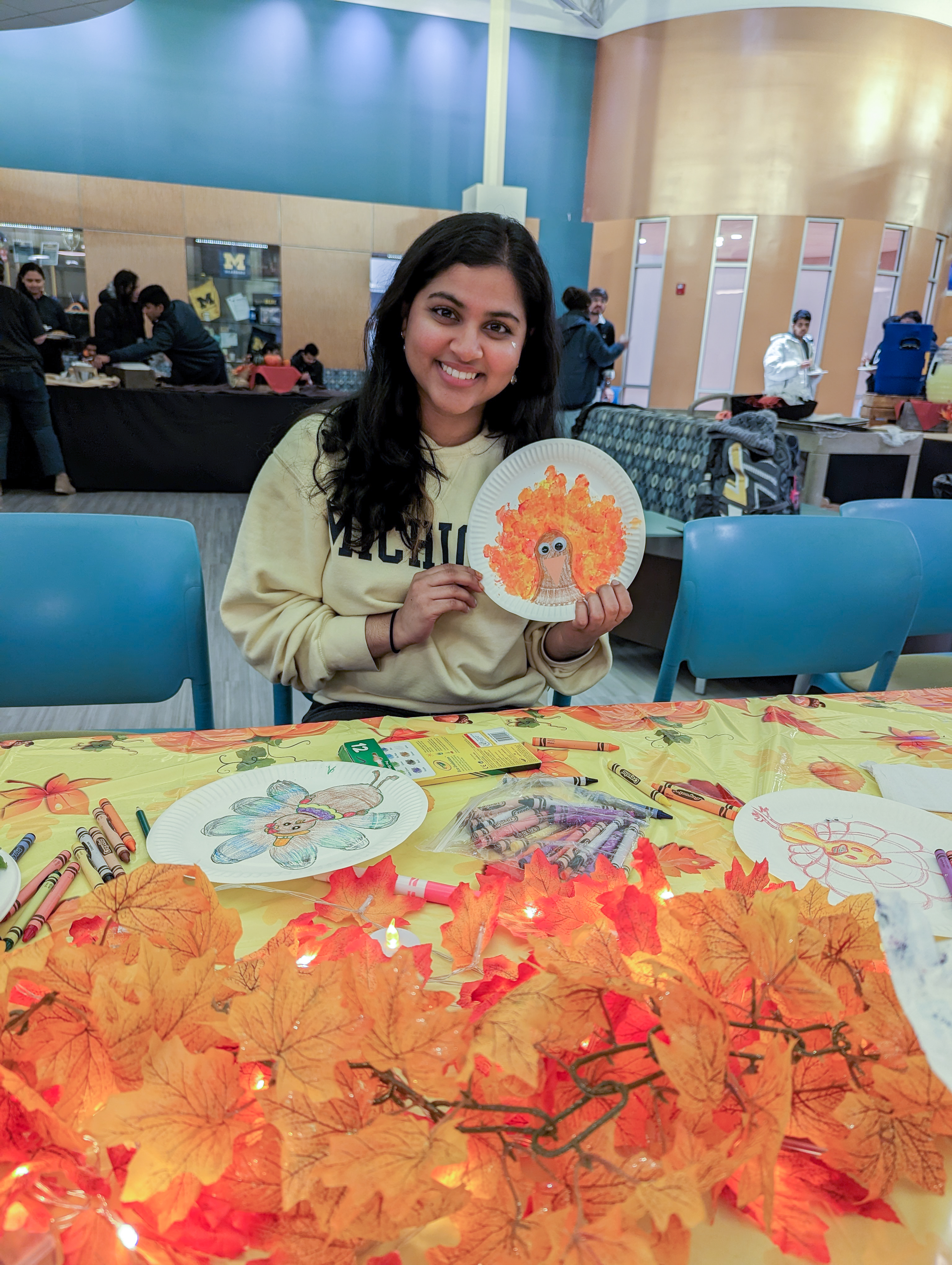 “Coming from an immigrant family, I haven't celebrated Thanksgiving but growing up here in America, I've seen that it is a big event. So every year at school, we would celebrate by having a Thanksgiving dinner just like now, and we would have crafts and stuff. So, yes, I did grow up with it but not as most American families would.” Asked about her favorites on the Thanksgiving menu, Chava said: “Mashed potatoes. It depends, but I like the ones with the best gravy and the turkey. The stuffing is terrific. Although, I could do without the cranberry sauce even though I know it's a big staple thing. Something that was lacking today was pumpkin pie, that's also a staple item, especially with whipped cream on top.” 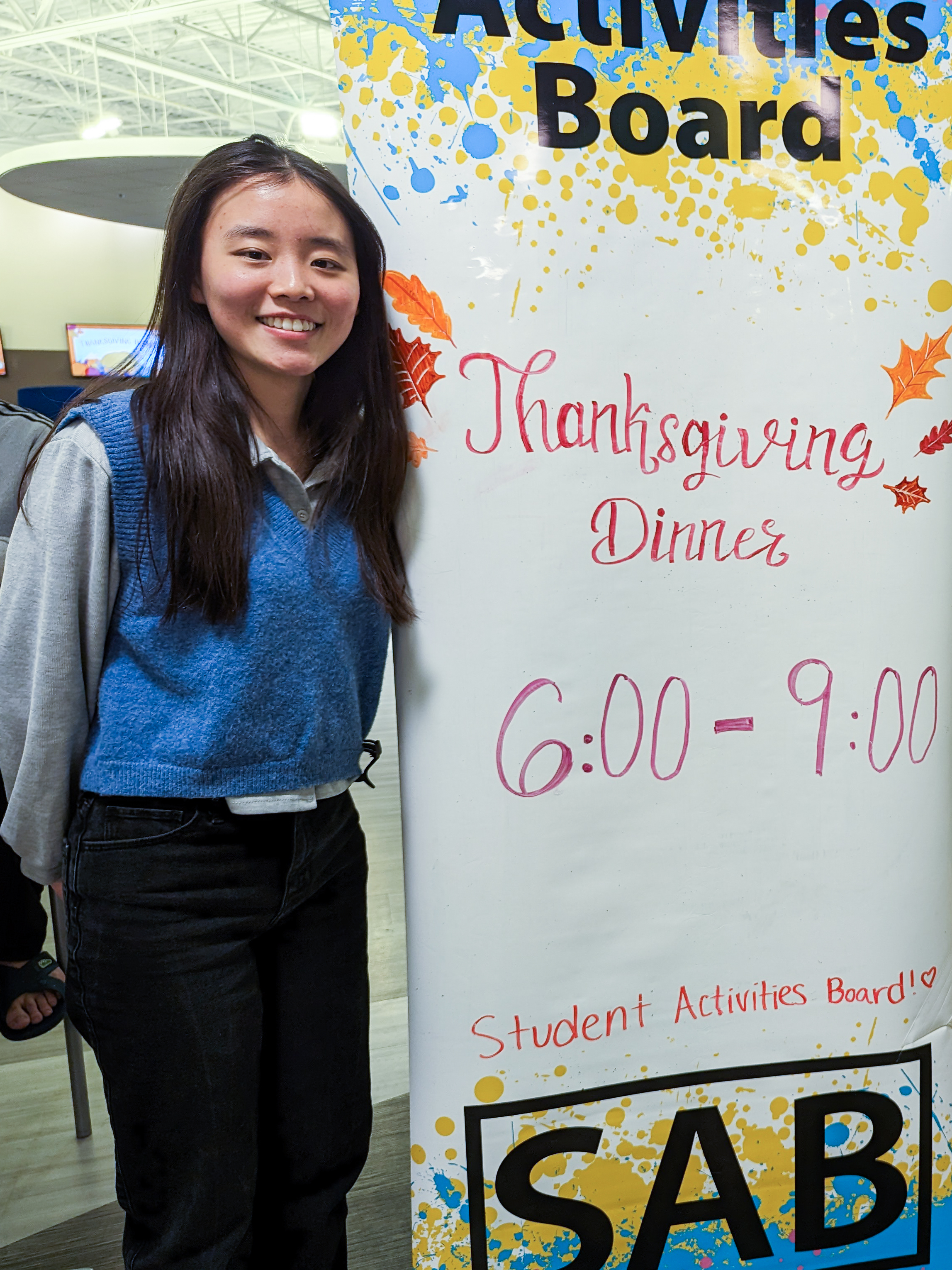 “The main thing is to get people that don't celebrate Thanksgiving a chance to enjoy it because I usually mingle a lot with international students, and we don't celebrate Thanksgiving. So this is an excellent opportunity for them to taste the food we typically serve during Thanksgiving and feel the holiday spirit.” The SAB president also revealed some ideas for next year. “We could get a whole turkey next time instead of just slices like today. Even a fake one should work! Because I can imagine when someone new to Thanksgiving comes here, they would expect to see a whole turkey, but when they're here, they only saw a sliced turkey. We may want to do that next year."

Story and photos by Rudra Mehta