Will student loan reduction efforts get voters to the polls? 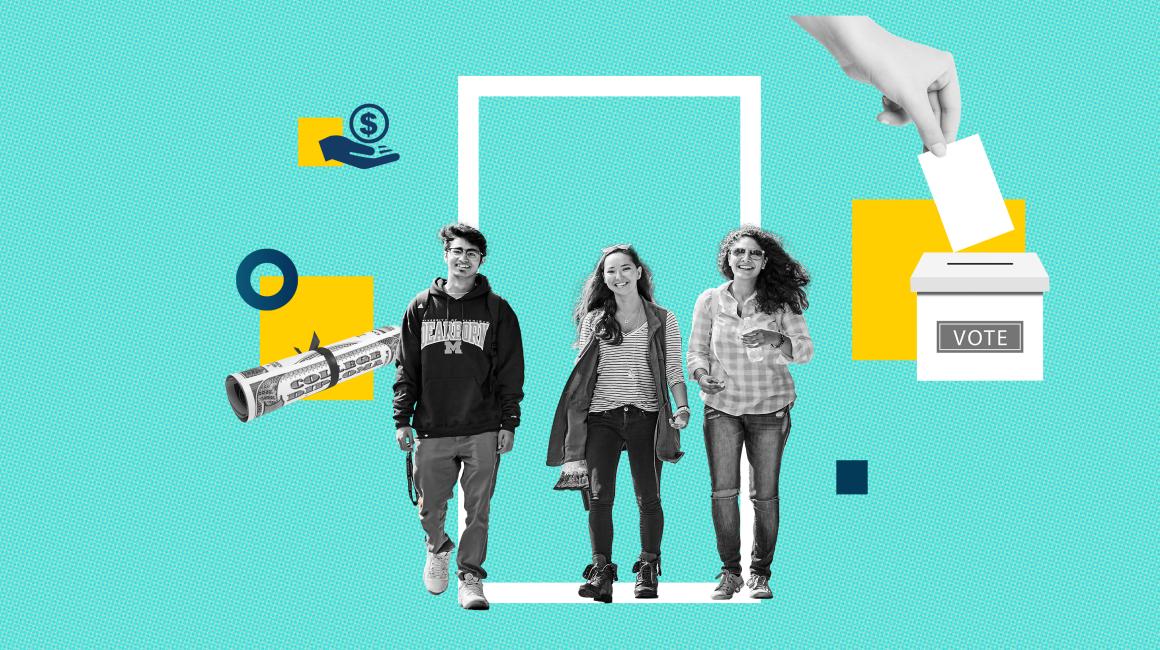 It’s mid-term election day, folks. One of the hot topics in the 2020 election cycle was student loan reduction. But will recent actions regarding student loans drive people to the polls in 2022?

In October, the Biden administration rolled out the application to apply for student debt relief. The plan? To remove up to $20,000 in government-held federal student loan debt for people with incomes below $125,000 a year, or households that earn less than $250,000.

Political Science Professor Dale Thomson, a public policy expert, said millions of Americans could see their student loan debt reduced, and in many cases eliminated, under the program. But he’s noticed it hasn’t been mentioned much by either party.

“I haven't heard it being touted in this cycle’s campaigning, which is a bit surprising. That’s likely because abortion, inflation, crime and protecting democracy — oh, and also general craziness — have been the more prominent topics."

Talking with Thomson, he shares a few takeaways regarding the federal government’s student debt relief plan, the policy history behind it, and how it could impact UM-Dearborn alumni and students.

The application for debt cancellation is now out there. And so are the legal challenges.

A federal appeals court temporarily blocked the initiative pending consideration of legal arguments submitted by the Biden administration and a coalition of Republican-led states seeking to block the plan (but still allows people to apply for relief; but student loan reduction can’t be processed at the moment).

Here’s a bit of history: Student loan forgiveness was first introduced in 2001 by President George W. Bush to limit hardships on people who experienced 9/11. Then it was expanded under Bush. The Higher Education Relief Opportunities for Students (HEROES) Act of 2003 granted the Secretary of Education authority to reduce or eliminate the obligation to repay the principal balance of federal student loan debt to all affected individuals during a presidentially declared national hardship, including an economic one.

In response to the COVID-19 pandemic, the scope was extended to every borrower in the nation with a loan held by the federal government. Under President Donald Trump, repayment obligations were suspended and interest payments were waived. That ends on Dec. 31, 2022.

“And now we are here,” Thomson said. “From a policy standpoint, there is extensive precedent — decades of history — showing that the president is in his legal right to do this. The courts will decide to the extent allowed, but President Biden is acting under the same policy that every president in the past 20 years has used.”

THE PROGRAM WOULD HELP UM-DEARBORN STUDENTS AND ALUMNI

“It’s hard to argue $10-20K in debt erased is not helpful, especially when we are looking at our student population,” Thomson said. “Data shows that a program like the one the Biden administration proposed would remove student loan debt — most, if not entirely — for many of our UM-Dearborn students.”

Here’s the data: Looking at the UM-Dearborn Class of 2017, the average debt level for students with loans was $25,749. Out of the state’s public universities, only UM Ann Arbor had a lower average — by about $50. On average, UM-Dearborn graduates had $4,500 less debt than graduates from other four-year universities in Michigan. This difference has held fairly steady since the early 2000s.

Taking the same year (2017), 43% of UM-Dearborn’s students were PELL eligible — and PELL eligible students can apply for up to $20,000 relief if they fall within the program’s income restrictions.

“This program gives the opportunity to put dollars into homes, businesses and communities. It takes away the psychological burden of debt. And they have the education for the careers needed to make our state and nation economically competitive.”

WITH REGARD TO STUDENT LOANS, THIS PLAN DOESN’T ADDRESS THE ROOT OF THE PROBLEM

Even though it helps Dearborn Wolverines, Thomson understands some of the criticism of the student debt relief plan — especially the observation that it doesn’t address the root of the problem.

Per-capita student debt in the state rose by 418% from 2013 to 2018; and borrowers often defaulted. “Clearly there is an issue,” he said. “Debt relief may help people who have taken out loans, but it won’t help students in the future. We need to address how to fund higher education differently or we need to go back to how higher education was previously funded, which entails having state legislators provide adequate state funding and not push the burden onto students."

Case in point: State appropriations accounted for more than 43% of UM-Dearborn’s general funds in 2001; that number was 17% in 2022. As the state funding reduces, tuition for students increases.

“I can’t speak for all universities, but I know we are very lean at UM-Dearborn with spending. It’s worth noting that UM-Dearborn receives one of the lowest amounts of support per student out of all the 15 public universities,” Thomson said. “We keep hearing that education is a priority and that there is a need for credentialed citizens in our state and nature. Students want to earn a degree and get an in-demand high-paying job. College educators want to teach them. The infrastructure is there, but budgets need to reflect that this is a priority.”

Thomson said responsibility is shared and there’s not a quick funding fix. But he realizes erasing student debt is a band-aid on a bigger issue, and he hopes that conversations around debt relief get people thinking about higher education funding as a whole.

PEOPLE NEED TO SPEAK UP AND VOTE

Thomson said it’s important to exercise your right to vote and reach out to your representative. If you don’t speak up, the odds are that legislatures won’t act.

“I’ve spoken with folks in government about higher education funding and student loan debt concerns. They’ve told me it’s not an issue for their constituents. Looking at the numbers of people impacted, that can’t be true. But no one is calling, emailing or raising concerns in a significant way. So they aren’t going to change the status quo.”

With midterm elections today, Thomson encourages people to get out and vote. Student loan debt relief isn’t on the ballot directly, but three proposals and a gubernatorial election are (among other things). These leaders and proposals will shape our future — which could include this topic.

And if you don’t vote or advocate for change you want to see, government leaders will focus on something else.

“Let people know what you want the future to look like. If you don’t, someone else will. The good news is you do that starting today.”

See what’s on the Nov. 8 ballot here, and more information about the proposals from Bridge Michigan. Polls (find your polling place) are open until 8 p.m. Voters have the right to cast a ballot if in line by 8 p.m.