The kids are led by interpreters, mostly UM-Dearborn biology majors and alumni, who guide students’ understanding about ecology and different species through hands-on group learning experiences and conversations. 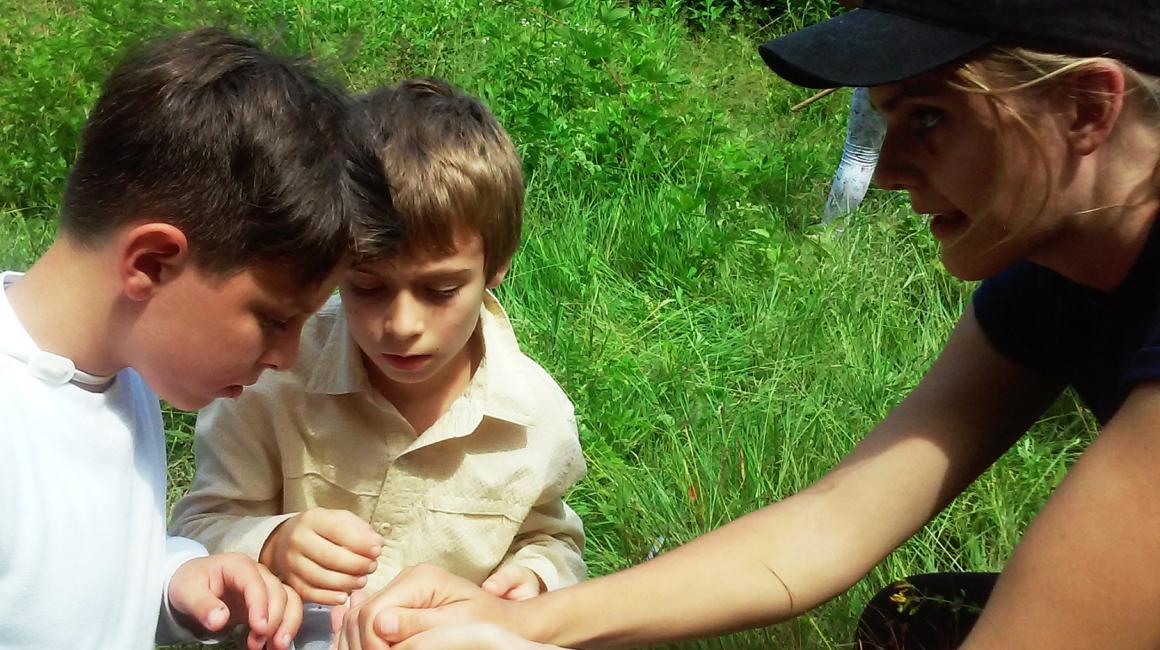 The children scamper around like the grasshoppers they aim to catch in their woven nets in the fields of the University of Michigan-Dearborn’s Environmental Interpretive Center (EIC).

It is Thursday, “Spiders and Insects Day,” for the 30 second- through fourth-graders enrolled in the Young Naturalist Program, a weeklong environmental science summer camp, presented annually by the EIC.

From the Japanese Beetle-scattered fields to the bug room, there are different learning stations for kids to explore their natural surroundings.

The kids are led by interpreters, mostly UM-Dearborn biology majors and alumni, who guide students’ understanding about ecology and different species through hands-on group learning experiences and conversations.

“There are more than 200 [insect] species on our grounds,” said Kyle Kandilian, a former Young Naturalist Program participant who, as a child, entered the camp after his parents enrolled him to further his interest in nature and science.

In April 2014, Kandilian graduated from UM-Dearborn with a bachelor’s degree in environmental science. Since then, he has launched a thriving insect breeding business.

Two years ago, Kandilian became an interpreter to share his passion for insects and nature with kids in the summer camp. He donates insects from his breeding business for kids to observe indoors at the center.

“The biggest goal is not only to encourage the kids who are passionate about insects but to eliminate the fear and encourage passion in children who are fearful of them,” he said. “We have had some kids who come into the program saying, ‘Bugs are gross’ and by the end of the program they love bugs.”

Morgan, 8, is on the natural scientist track with an enhanced interest in insects that stems from her involvement in the camp. “I wasn’t expecting to catch bugs but it was fun. I learned what [beetles] eat,” she said. This was her first year in the program.

Andrea Henson, a Detroit Public School teacher, enrolled her daughter Morgan in the summer camp because of her interest in science. “We use a lot of technology but it is nice to expose her to different sciences, especially natural sciences,” Henson said. “And she loves the program.”

Henson plans to enroll her daughter next year. It is common for parents of summer camp kids to re-enroll their sons and daughters in the yearlong programs offered at the EIC, according to Sara Whitaker, a fourth-year interpreter and UM-Dearborn student.

“Our summer camp program is special because the kids want to be here and they have opportunities to explore their interests,” Whitaker said.

First, there is group round-up at 9:30 A.M. Then, there are break-out sessions divided into two groups, with each group learning about different insects like Katydids and Blue Deaf Fainting Beetles. At 11:00 A.M., it is time to go outdoors with nets in hand to catch and observe insects before returning to the center by 11:45 A.M. to write journal entries and reflect on the day. But you will not hear the kids complain. Instead, you will hear thoughtful conversations and laughter that rivals the bird songs outside the center. So, what makes the difference? According to Rick Simek, EIC Program Supervisor, it is the commitment of the centers’ 15 student staff members.

“Students are a major part of leading the program,” Simek said. “The kids get so much individualized attention in the program that it enhances their experience.”

Simek, who has coordinated the program for 22 years, said the camp continues to grow. The program pairs children with caring and knowledgeable staff interpreters for outdoor explorations of plants and animals in their natural habitats. The interpreter-led sessions touch on topics that include pond life, insects and spiders, soil creatures and birds.

While summer camp programs have ended, the program will resume in October. The registration for the program is currently open and the cost is $75.00 dollars for the full nine-month program.

In the fall, the Young Naturalist Program is open to fourth through seventh graders interested in exploring nature. During the school year, the program meets one Saturday a month. Outdoor session topics include owl prowl, spring wildflowers, birds, and frogs and toads. Youth receive field packs and guides for various plants and animals.

The center offers other yearlong programs for school field trips such as the Pond Programs, Seasonal Walks, Water Shed Programs, Invasive Species and the Maple Syrup Science Program. The center is open to the public for nature walks and visits from 10 a.m.-5 p.m., Monday through Saturday. For more information, contact EIC Supervisor Rick Simek at 313-583-6371 or rsimek@umich.edu.