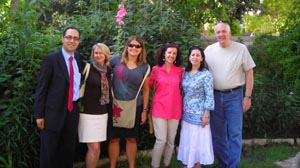 Not even a State Department security warning could keep Barbara Peitsch and Mike Callahan from their planned travels this summer.

The two traveled to the Middle East and North Africa as part of a reverse professional exchange sponsored by the U.S. State Department. They hoped to promote the process of guiding, counseling and mentoring young people in their educational and career choices.

Callahan and Peitsch, along with six other Americans, participated in a series of workshops and visits with university administrators, faculty members and students in Israel, the West Bank, Algeria and Morocco. In many of the host locations, students graduate with desired degrees but few resources to help them find employment.

“We want to encourage universities to engage students before graduating—set up career departments, build relationships with employers,” said Callahan, director of internships and career services for the College of Business. “The more students who graduate without jobs, the more students who will leave their country.” 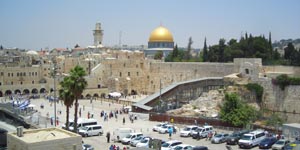 Western Wall and Dome on the Rock. Photo submitted by Mike Callahan.

Peitsch organized the follow-up trip after 32 fellowship participants traveled to Michigan and Washington D.C. to learn more about career placement. The two-way relationship has benefited parties on both sides, she said.

“I learned so much by spending time in local organizations, seeing and experiencing their realities firsthand,” said Peitsch, program manager at the Henry W. Patton Center for Engineering and Practice (HP-CEEP). “We also learned about the ways that they work with young people who are educated but out of work. It has given us a lot to think about.”

As for that State Department travel warning in Algeria? Many in the delegation were concerned about the threat of a terrorist attack, but quickly found the country to be one of the most memorable stops.

“The people of Algeria were incredibly welcoming and hospitable, and we could all feel how genuinely happy they were to have us there to share our professional expertise and exchange ideas and experiences,” Peitsch said.

Now back from their travels, participants on both sides have asked what’s next.

“Everyone has asked for future collaboration in creating career centers, centers for entrepreneurship, and in help developing better relationships with private sector employers,” Peitsch said. “I plan to watch funding opportunities carefully to see if we can continue building capacity in these countries.”

FacebookTwitterLinkedIn
College of BusinessCollege of Engineering and Computer Science

James and May Bell Loeb Scholarship recipient Gevino Kassab expresses gratitude for the support that has shaped his UM-Dearborn experience thus far, and looks forward to accomplishing his career goals

What to expect at next week’s Strategic Planning town halls

It’s your turn to weigh in on the vision for the university’s next decade. Here’s how to get ready for three town hall forums next week.

Give us five minutes and we’ll catch you up on some of the big ideas you’ll be hearing about in this month’s Town Hall forums.
Back to top of page