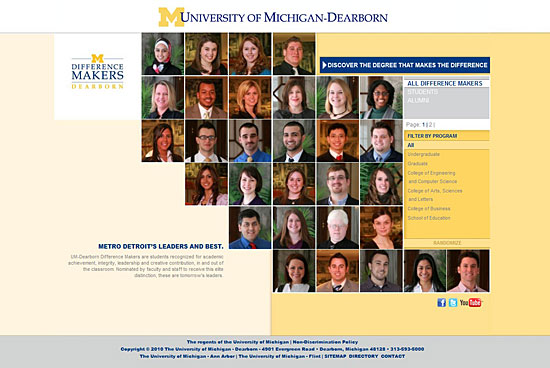 That's because the university has launched its "Difference Makers" media campaign to advertise the UM-Dearborn brand throughout metropolitan Detroit.

The campaign builds on the 50 students who were recognized as "Difference Makers" for their academic achievement, integrity, leadership and creative contribution in and out of the classroom as part of UM-Dearborn's 50th anniversary celebration.

The Difference Makers media campaign will serve as a platform to tell the UM-Dearborn story using key messages to important audiences. The campaign will introduce television spots to the media mix of billboard, bus and online ads that will invite the community to learn more about UM-Dearborn's outstanding students, faculty and alumni via a brand new Difference Makers website at http://michigandifferencemakers.com/.