Due to the COVID-19 pandemic, UM-Dearborn classes are being held remotely through the end of the semester, Summer I and Summer II. Most campus operations are being conducted remotely and buildings are closed. Before coming to campus please call ahead to determine how services are being delivered. Events have been postponed or canceled, including Spring 2020 Commencement. Pass/fail decision date extended to May 5. For more updates please visit the Coronavirus information page. 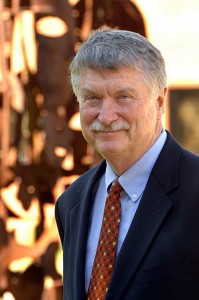 Anthony W. England has been named dean of the University of Michigan-Dearborn College of Engineering and Computer Science (CECS). He has served as interim dean since May 2011.

The University of Michigan Board of Regents approved the appointment Thursday, March 20.

England has had an extensive and notable career as an engineer, scientist and researcher. He is a former NASA astronaut, where his assignments included mission scientist for Apollo 13 and 16 and spaceflight on Shuttle Challenger. He also spent 25 years as a faculty member at UM-Ann Arbor and served as associate dean for academic affairs for five years within UM-Ann Arbor’s College of Engineering.

“The disciplines of engineering launched our academic enterprise some 50 years ago, and since then the college’s reputation has grown with the university’s,” said Kate Davy, provost and vice chancellor for academic affairs. “Tony is a proven educational leader, an innovative researcher and a strong collaborator who has the ability to maintain the excellence CECS has achieved over time and secure a strong, productive future for the college.”

“Having served as interim dean for the past 22 months, I have developed a deep respect for the mission of UM-Dearborn and am looking forward to continuing the success of the CECS mission,” England said.

England earned three degrees from Massachusetts Institute of Technology (MIT): a Ph.D. in geophysics and a Master of Science and Bachelor of Science in geology and geophysics.

Student’s research digs into how cancer spreads in the body

Master’s student Malak Nasser says understanding how cancer metastasizes could reveal clues about how to slow it down.

Vahid Alizadeh, a Ph.D. student under the supervision of Professor Marouane Kessentini in the CIS Department, will join the faculty of the School of Computing at the DePaul University as a tenure-track Assistant Professor in Fall 2020.

Student’s research digs into how cancer spreads in the body

Master’s student Malak Nasser says understanding how cancer metastasizes could reveal clues about how to slow it down.

UM-Dearborn’s counseling director talks about how to nurture your mental health during the pandemic — including why you should still shower and comb your hair even if no one’s watching.

U-M Board of Regents Roundup for March 2020

Get the latest on gifts, retirements and committee appointments announced at the March U-M Board of Regents meeting.
Subscribe to the Reporter
Back to top of page