A family affair: Mother and son set to graduate together 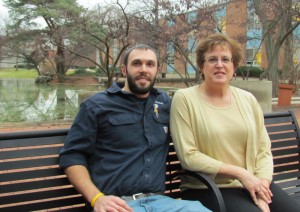 Marcy Omaits didn’t always have a quiet place to study. She’d lug her textbooks to her sons’ wrestling matches, her quiz notes to Bon Jovi concerts with the boys. Studying was important, but not at the expense of her family.

On December 14, the balancing act pays off as both she and her son Sean graduate from University of Michigan-Dearborn—Marcy with a master’s degree in education with an endorsement in learning disabilities and Sean with a bachelor’s degree in electrical engineering.

Marcy and her husband, Maurice, always placed a high value on education. She describes herself as “that mom”—the one who assigned additional assignments in math and penmanship when Sean and his brother, Ryan, came home with no homework.

She wanted to make sure her sons were on the right track. For her, that meant staying home with them when they were young and volunteering at their schools as they aged. While volunteering, someone asked if she had ever considered a career in education; she seemed to have a real knack for it.

So the former nuclear power plant chemist enrolled at UM-Dearborn, first for her teaching certificate and then for her master’s degree.

Of course, back to school meant extra support from Maurice and the boys.

“We called a family meeting. Everyone knew that this is what I needed to do to get where I wanted,” said Marcy, who now teaches fifth grade in Lincoln Park.

Sean joined her at UM-Dearborn in 2008 and immediately immersed himself in the college experience. He served as treasurer of the Greek Leadership Council and president of Tau Kappa Epsilon, helping to earn the chapter numerous awards.

“I never wanted my college experience to just be about going to class,” he said.

Now he’s finishing his senior design project and his final co-op with DTE Energy, where he plans to work full time after graduating.

While mom and son rarely unintentionally ran into each other on campus, a study session in the library or a quick meal in the University Center offered each of them an extra dose of family support.

“Finals weeks were stressful times. My husband was very patient with all of us,” Marcy said.

That’s all water under the bridge come Saturday, as the family celebrates together.

“When we started this journey 13 years ago there is no way we could have known we all would be graduating on the same day,” Marcy said. “It will be a really special day for all of us.”

FacebookTwitterLinkedIn
CommencementCollege of Education, Health, and Human ServicesCollege of Engineering and Computer Science

Sunday was a big day for many in the UM-Dearborn community — nearly 1100 students graduated. Although there wasn’t a physical ceremony, the community rallied to recognize their achievement.

With Cady Ericson's education, connections and experiences — which include an internship with the IRS and managing a College of Business investment portfolio through the stock market's turbulent spring — she says she’s prepared and ready for what’s next.

Spring 2020 grad Owen Ekblad says his UM-Dearborn journey gave him a math education that's led to new experiences, like winning a U.S. National Yo-Yo Competition. Now he’s taking encouragement from professors to do something he never thought possible — starting his Ph.D in the fall.

The university ranks fourth among regional public universities in the Midwest.
Back to top of page