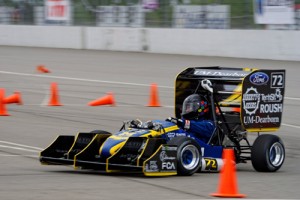 UM-Dearborn Formula SAE team member Trent Brown competed in the endurance event at the Formual SAE Series competition at the Michigan International Speedway. The team placed 8th out of 110.

If you were to look in the back of Mary Bellino's white Ford Fusion, you'd see a few homework papers, a stray pen and orange road cones.

“We do practice laps every weekend in May and June in the parking lots outside of the IAVS,” said Bellino, Formula SAE team captain. “I found a few cones that were left behind and put them in the back of my car.”

Zooming around those cones this spring was part of the Formula SAE team’s successful 2015 run. Bellino and her teammates have found that practice makes nearly perfect.

In May, the team took 8th place out of 110 teams internationally at the Formula SAE Series competition at the Michigan International Speedway, the highest the team has placed. In June, they placed 4th out of 28 at the Formula North competition in Canada and were awarded the Toyota Continuous Improvement Award.

Bellino said her team's dedication to getting the car done a month earlier than in the past was the key to their success.

“Sure, you want a car that looks good, but it's not the design that makes the best car. It's the most tested car that does. The more time you have to test, the more time you have to figure out what might go wrong and then fix that,” she said. “So by the time you arrive at a competition, all the kinks are worked out and it's set up to perform as best as possible. Another added benefit is that all the drivers are familiar and comfortable in the car.”

The team's wins are now part of the student organization's more than 20-year history. The group currently has 25 students from different majors and experience levels. Bellino said the concept behind Formula SAE is that a fictional manufacturing company has contracted a design team to develop a racecar that's evaluated for its potential as a production item for a non-professional weekend autocross racer and for its overall performance.

Bellino, who was elected team captain by her peers, said it was the challenge of coming up with an idea as a team and then seeing it come to life that led her to join Formula SAE in January 2014.

“I like being involved with something from the imagination stage until the final project,” said the mechanical engineering and math major who has interned at both General Motors and Roush. “It takes a lot of work—and I like that.”

Bellino said she didn't work with vehicles until her Formula SAE experience. She said she knew she wanted to go into engineering because of her love of science and math, and attended UM-Dearborn because it has one of the nation's best programs. But she wasn't familiar with the automotive side of engineering until last year.

Bellino credits friends and classmates to introducing her to the student organization and said she's glad that she's had the opportunity to work with talented peers who have showed her skills that will help her in the future.

Now when Bellino isn't in class or working at GM, she can be found welding in the IAVS, working with her team—she said the they get together about 40 hours per week—and relishing in their results.

“Standing on the side of the track and seeing our car cross the finish line in the endurance test was so exciting. So many good teams weren't able to get their vehicles to do that,” she said. “Our car is well built and solid. Just like our team.”