Ulbrich, who started May 15, brings nearly 20 years of higher education development experience to the role.

Casandra Ulbrich calls education the great equalizer. The incoming Institutional Advancement vice chancellor believes that quality education can change lives — it’s an idea that resonates with her, in part, because she’s lived it.

Ulbrich grew up in a home where “the ends never met.” So after high school, she took a chance by enrolling in a close-to-home community college, becoming her family’s first person to pursue higher education. She says her view of the world and confidence grew. After taking that first step, she decided to apply to University of Michigan.

“I didn’t know much about going to a four-year school, but everyone knows the reputation of Michigan. I met with a U-M counselor and spoke about my situation, financially and otherwise,” says Ulbrich, who was connected to some financial support through applying for Pell Grants and scholarships. “I was accepted and became a Wolverine.”

“I’m humbled and excited that I’m going to work for a place I hold in such high esteem and respect for having such an amazing impact on my life,” says Ulbrich, who started May 15.

Prior to her work in higher education — which totals nearly 20 years — Ulbrich worked in politics. This included working for two years in Lansing before becoming a press secretary for former Congressman David Bonior when he was the House of Representatives’ minority whip.

Always interested in government relations and how legal decisions affect common people, Ulbrich studied a mix of communications and political science at U-M.  “This taught me so much about the world, the country, the state and myself,” says Ulbrich, who’s the current Michigan State Board of Education president. “I learned the importance of getting involved in what you believe in.”

Wanting to give back and help others gain access to higher education, Ulbrich shifted career focus and accepted a position at WSU in development. But she still kept her eye on Washington — during the Obama Administration, she served as the Michigan Board of Education's representative on the National Association of State Boards of Education government affairs committee, a committee charged with making recommendations to Congress on federal education policies. Recently, she has been appointed by the Governor to serve as a commissioner on the Midwest Higher Education Compact and as a board member for the Education Commission of the States.

At WSU, Ulbrich worked as a senior director of development and later as WSU’s director of corporate and foundational relations. She also led the University’s multi-million dollar "Aim Higher for Students" campaign that raised money for need- and merit-based scholarships.

After WSU, she headed to Macomb Community College (MCC) — one of the nation’s largest community colleges — where she served as the Vice President for College Advancement and Community Relations.

While at MCC, she launched the school’s first comprehensive capital campaign, which exceeded its overall goal by seven percent. She also helped implement a scholarship program that lead to full-ride scholarships awarded to a student in each of the Macomb County public high schools.

And now she’s looking forward to how she can best assist UM-Dearborn’s students, initiatives and partners in her new role.

“I’ve seen the impact of mentorships, scholarships and community partnerships — every new opportunity, every scholarship dollar opens the door for a student,” she says. “My education has shown me the power a degree holds. And I’m looking forward to providing further support in helping UM-Dearborn students reach their dreams.”

Ulbrich is a 1996 graduate of the University of Michigan-Ann Arbor (A.B.). She’s also earned an associate degree from St. Clair County Community College, and a master’s degree and Ph.D. in communication from Wayne State University (WSU), where her dissertation was on media framing of the 1967 Detroit uprising. 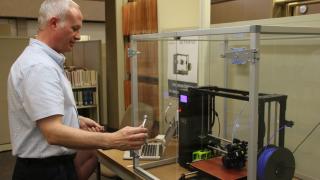 The LulzBot Taz 6 is centrally located and available for all current UM-Dearborn students, faculty and staff to use.... 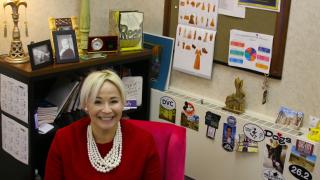 With 18 years HR experience, the UM-Dearborn alumna took on this newest leadership role in November....