Following graduation, Men's Hockey Team Assistant Captain Mathieu LaForest is looking forward to his role at Penske Logistics as a lead network design analyst. The supply chain and logistics major credits his success to the people — his professors, coaches and teammates and parents — who have inspired him. 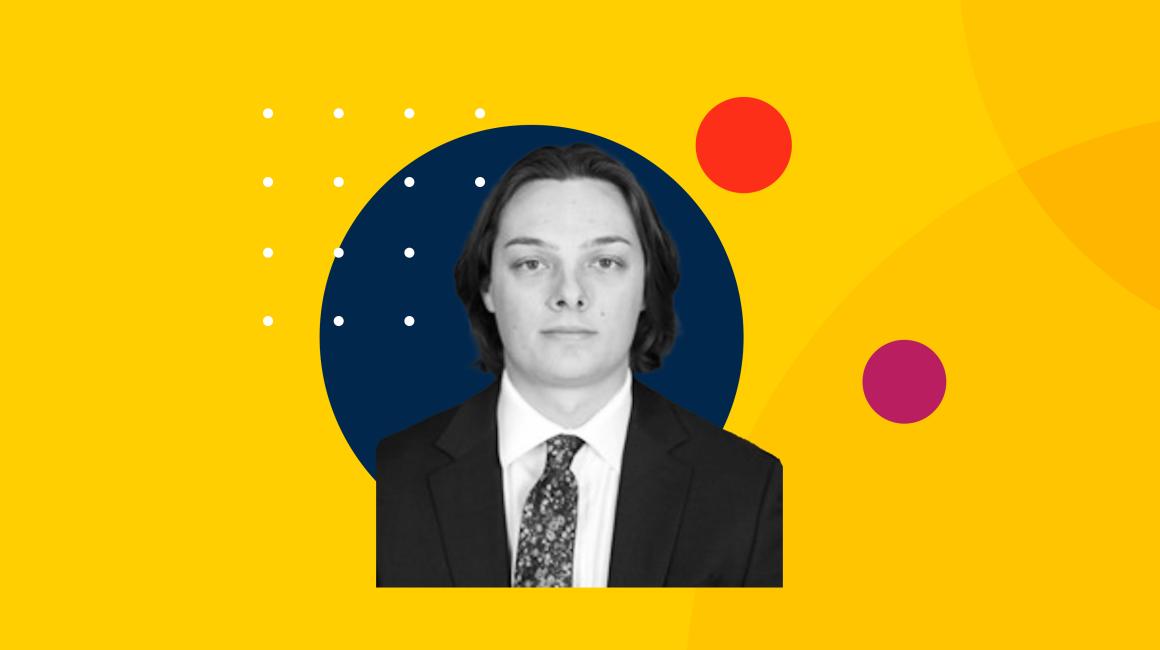 College of Business Class of Spring 2022 graduate Mathieu LaForest wants to lead by example because he’s learned so much from the people around him.

His hockey coaches taught him discipline. His parents instilled a strong work ethic. His teammates showed him the importance of mentoring and support. And, reflecting on his four years at UM-Dearborn, LaForest credits his professors for sharing their knowledge so he can professionally succeed.

“I’m really excited to get this opportunity. When I did an interview, one of the guys has been there for 22 years, the other has been there for 15,” he said. “It felt like a good environment with good people, and the position was the right fit for me.”

LaForest, who had NCAA schools pursuing him to play hockey, figured out his projected debt before even choosing a college. He said UM-Dearborn gave him the opportunity to continue his hockey career while also giving him a close-to-home education that was affordable, especially with financial aid.

“It's important to give someone who has talent, drive and determination access to a disguisable degree,” said LaForest, who is a first-generation college student. “U-M is a world-renowned degree. And, thanks to the Go Blue Scholarship, I earned a highly sought after degree for a little amount of debt.”

The Go Blue Guarantee is U-M’s landmark promise of four years of free tuition for qualifying full-time, high-achieving in-state undergraduates with a family income of $65,000 or less and assets less than $50,000.

LaForest recognizes that he's a numbers guy. Originally he explored COB accounting classes. He liked them. But when he took Operations Management 300 — the introductory supply chain management course — he realized what he wanted to do as a career.

“It’s taking the quantitative stuff from finance, the numbers, and combining it with the qualitative — like, for example, how severe weather events may impact your transport mode and delivery timing — to figure out the right amount of something at the right time. It’s not just about what is the lowest cost; there’s a lot more that goes into it,” he said.

From electronics to toilet paper, nearly everyone across the globe couldn’t get access to the items they wanted — or needed — at some point during the past two years.

“We’ve recently seen how important these roles are. If something isn’t right, there’s an imbalance with supply and demand. It’s interesting to see how everything works together and it’s helped me better understand why there have been major shortages during the pandemic.”

LaForest said the silver lining of going to college during the pandemic is being able to ask questions to professors who are researchers and industry experts. He said a major part of the disruption is due to lean manufacturing and just-in-time supply chain practices were the standard for the past 50 years. That’s when you only make or order what you think is needed to avoid holding fees or industry storage costs.

“In a perfect world, it makes sense to do it that way to keep your costs down. But in the real world, there are pandemics and fires and unexpected demand surges. We’ve learned that hybrid models, where you build in a little safety stock, may be the best way to go. As we’ve seen, things do happen.”

He said his business courses, even when remote, discussed current events and potential ways to address supply chain challenges in real time. He said one of his favorite professors, Operations Management Lecturer Gerald Holowicki, also shared some wisdom gleaned from another turbulent time — the automotive crisis during the 2008 recession.

“He was a consultant during that time and worked with Ford Motor Company, who, as we know, didn’t accept a bailout,” LaForest said. “It was great being able to talk to someone who’s experienced another historic time for logistics and supply chain issues and ask questions. I was fortunate to have professors who enjoy teaching and have the industry experience for us to learn from.”

LaForest said he’s had big wins outside of the classroom too. During his freshman year, the Wolverine hockey team was No. 2 in the country and won National Association of Intercollegiate Athletics (NAIA) nationals. They won the Wolverine-Hoosier Athletic Conference championship as a sophomore. And, after having the season canceled his junior year, they came back his senior year and went to the NAIA finals.

“Hockey has given me so much. So many great memories, people and life lessons. For the national semi-final game this year, I scored two goals, and the winning goal when we went in OT, to send us to the national tournament. It was a nail biter, but it was pretty cool to get a hat trick.”

“Even if I never step foot on the ice again, hockey will always be with me.”

LaForest, who’s played hockey since he was a child, said his parents sacrificed for him to get where he is today. And he’s grateful that they always put their children first. LaForest said his sisters are also athletes who did travel soccer and figure skating.

“My dad is a union carpenter and my mom just went back to work. My parents haven’t even gone on a vacation since we were born because they put their money and time into our dreams,” he said. “When I get a little more established, I want to take them somewhere warm to celebrate. Maybe a trip to the Bahamas will be in our future.”

It won’t be beach weather on Saturday — but the forecast is calling for 60 degrees for the UM-Dearborn outdoor ceremony. But LaForest will have his family there to celebrate the success he’s earned by watching and learning from his parents, coaches, teammates and professors.