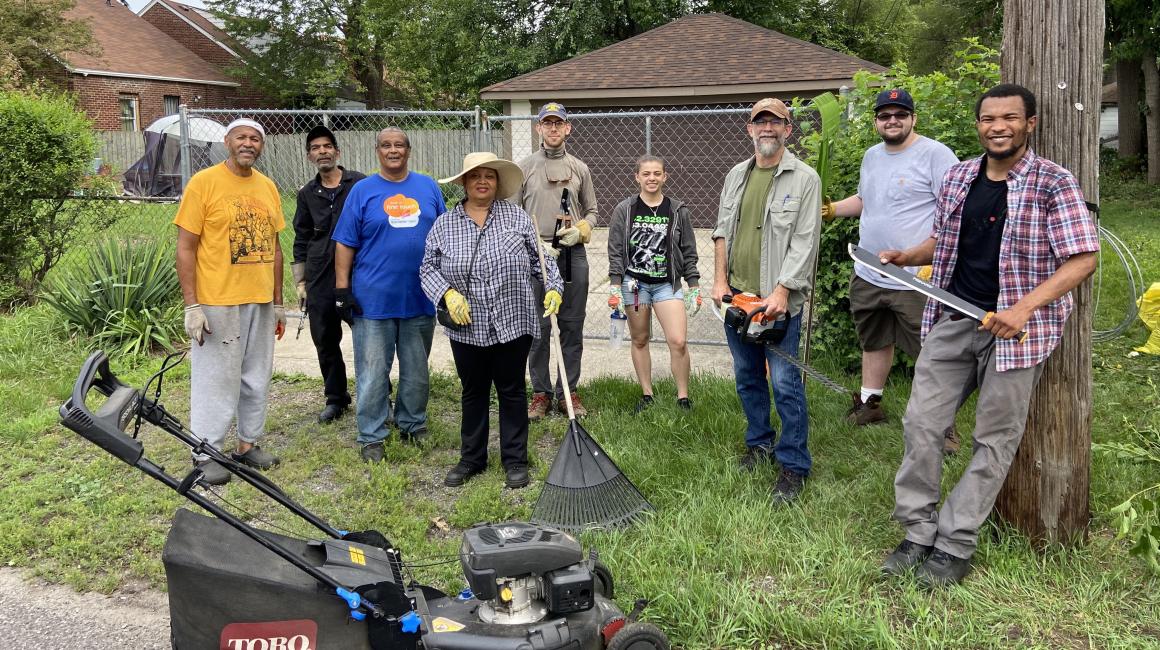 This article was originally published on July 19, 2021.

Alleys were once an important part of city infrastructure, usually related to trash collection or as a conduit for electrical and telephone service lines. But as city needs shifted, so did the roles of these thoroughfares.

The City of Detroit stopped maintaining alleys in the late 1980s, granting control to homeowners and relying on residents to maintain the spaces. However, due to lack of resources and declining population, many of the city’s alleys became spaces associated by many residents with blight and disorder.

“People were doing all kinds of things back there,” said Detroit resident Katrina Lombard, whose fenced yard backs up to an alley. She’s lived in her home for 16 years. “They would walk through the alleys and case houses to break into. You couldn’t always see them, but they sure were watching you.”

In the past year, Lombard’s neighborhood association — led by 40-year resident Chuck Rivers —  steered alley clean-up efforts in their northwest Detroit community. They removed tires, wayward trees, overgrown vegetation, mattresses and more. Some alleys became additional lawn space for interested homeowners. But there were more alleys, like the one behind Lombard’s home, waiting for a purpose.

And that’s where UM-Dearborn comes in.

Sociology Professor Paul Draus, Geology Professor Jacob Napieralski and Mechanical Engineering Assistant Professor Christopher Pannier are working with Rivers and his neighborhood residents to re-engineer their neighborhood alleyways to meet community-driven goals like having a safe outdoor space to gather, walk and enjoy. They are also interested in making the area sustainable with pollinator gardens, bioswales, wind and solar lighting, and more.

“The clearing of these clogged alleys presents an opportunity to rethink alley function,” Draus said. “My students, through a Fall 2020 class, met with residents via video conferencing and collected ideas on how these alleys can be used in a way that would best benefit the community.”

Thanks to a catalyst grant from U-M’s Graham Sustainability Institute, the UM-Dearborn team is now able to turn these collected ideas into reality.

"We are delighted to support the work of Professor Draus and his colleagues on this creative, meaningful project," said Jennifer Haverkamp, Graham Family Director of the Graham Sustainability Institute. "A key goal of Graham's catalyst grant program is to co-produce sustainable solutions with end-users--the people the solutions will directly affect. The alley activation project does just that and opens countless possibilities for increasing safety, recreation, and community cohesion well beyond the pilot neighborhood."

Once the residents’ ideas are in place — implementation is in the beginning stages now — the UM-Dearborn team will collect data over the next year to see how effective the project is in addressing neighborhood priorities.

Main priorities include safety, which will be addressed through alley lights and regular maintenance clean ups; water management techniques, which will help curb flooding by slowing drainage when the sewer system is overloaded; and educational opportunities, which will be achieved through creating a space for local school children to learn about sustainable practices and the identification of garden pollinators and native plants.

“We have several schools within walking distance. It would be nice for the kids to come here and have time outdoors and learn something new. We are an active community and want the best for the next generation and for the people who have lived here for years,” said Rivers, owner of a stately 1924 brick Tudor. “When I moved in 40 years ago, it was because I couldn’t afford a home like this anywhere else. Now people are offering us cash to move out. While I appreciate the admiration of our homes, many of us aren’t going anywhere. We got work to do. Good things are in motion and partners like Dr. Draus and the University of Michigan are helping us get things done.”

Draus, Napieralski and Pannier hope that the one transformed alley will be an example on how Detroit neighborhoods handle the others. “We will gather primary data on the effectiveness of this installation in terms of stormwater management and offgrid energy production,” Draus said. “We’ll also map and model its potential extension through Detroit's extensive alleyway network — projecting the environmental, social and economic benefits to both local communities and the city government if this form of alley activation is implemented on a neighborhood or city-wide scale.”

Pannier did a rainwater barrel demonstration workshop outside of Rivers’ garage, showing residents how downspouts in the alley could serve as community-use water collection. Draus removed large fallen branches and looked to identify native pollinator plants among the weeds. Students removed vines and other overgrown plants climbing up the fences and garages.

And the residents continued to plan for the future.

“The Mayor’s Office is paying attention and they like what we are doing over here. They’re interested in having the University of Michigan take on multiple alleys,” Rivers said. “For everything, there is a season and a time. We are the elders of our neighborhood so to speak. Now is the time to lead by example so the next generation can both enjoy what we’ve done and know how to sustain it.”

Story by Sarah Tuxbury. If you’re a member of the media and would like to interview Professor Paul Draus about the Alley Activation Project, drop us a line at UMDearborn-News@umich.edu.