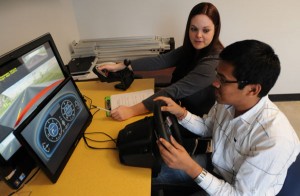 In 2010, there were nearly 6,000 automobile fatalities in crashes involving at least one driver age 65 or older, according to a recent report from the American Association of State Highway and Transportation Officials and TRIP, a national transportation research group. Although overall fatality rates among drivers 65-over have decreased in recent years, the number of older drivers killed or involved in fatal crashes remains disproportionately high.

In May, Hyundai-Kia Motors presented Kim with a $79,405 grant to research effective vehicle instrument panel displays and layouts that will help older drivers perform driving-related multitasking activities and that will enhance driving performance.

There were two phases to Kim's research: data collection using a driving simulator and subsequent interviews with the study participants regarding instrument panel layouts. To compare driving performance, the 40 study participants included male and female drivers ages 20 to 30 and 65 and older. There were no specific physical or cognitive ability limitations.

"We sent an email to UM-Dearborn faculty and staff to recruit senior drivers for the study," said Heather Harrelson, an industrial and systems engineering master's student who assisted Kim.

"Many younger staff members got their parents and friends to participate. We also recruited seniors from a database compiled by the Occupational Safety and Health Administration office in Ann Arbor. Many of the younger drivers were UM-Dearborn students."

"We found that older drivers seek simplicity," Kim said. "Most drivers don't like the tachometer and they don't care for coolant temperature gauges. What they do want is critical information, like a fuel gauge and seat belt and tire pressure indicators. They also prefer to have these critical indicators positioned between the speedometer and the windshield."

Kim and Harrelson completed the interview portion of their research by presenting instrument panel mockups to the drivers and recording their input and preferences on the cluster layout. They also asked for feedback about the importance of display components and usage frequency. Kim presented his findings to Hyundai-Kia in December.

"Future vehicles may feature configurable digital instrument panels," Kim said. "Then drivers will have the option of choosing the level of information displayed—from simple to complex. Ultimately, this research will lead to enhanced driver safety."

This article originally appeared in the Winter 2013 Dearborn Engineer.