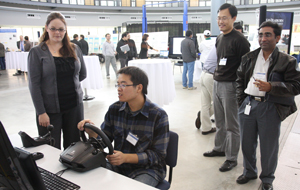 Visitors to the HP-CEEP anniversary event were invited to view student and faculty projects and displays.

For 20 years, that has been the mission of the Henry W. Patton Center for Engineering Education and Practice (HP-CEEP), combining the teaching environment with industry innovation.

On Friday, October 19, University of Michigan-Dearborn commemorated the 20th anniversary of HP-CEEP with a daylong celebration.

“HP-CEEP has been transformational for the college in having helped build a culture of research excellence among faculty while enhancing the education of students through real-world experiences,” said Tony England, interim dean. “The sustainability of HP-CEEP over 20 years is an indication and testament of its value to students, industry and faculty.”

HP-CEEP founder Subrata Sengupta envisioned the integration of teaching, research and practice in collaboration with industry in an effort to enrich the education of future engineers.

Sengupta, professor and former dean of CECS, believed UM-Dearborn’s presence in a heavily industrialized area uniquely supported HP-CEEP’s vision. “The biggest selling point of the school was the 100,000 engineers who were within half an hour from the dean’s office,” he said.

During the event, Sengupta and John Cristiano, director of HP-CEEP, recognized early supporters of HP-CEEP, including Hank Lenox, former director of Ford Production System, and Nirmal Singh, a dielectric scientist with DTE Energy, who were in attendance.

“Henry was a lifelong supporter of the university,” he said. “There was nothing more fitting than to name the center after Henry.”

The day featured research updates, presentations from faculty members and a keynote address by Bryce Hoffman, author of American Icon: Allan Mulally and the Fight to Save Ford Motor Company. The event was coordinated with a luncheon to recognize scholarship donors and students who have received scholarships.