Not your typical politician: CECS student takes a break from Brazilian politics to earn his degree 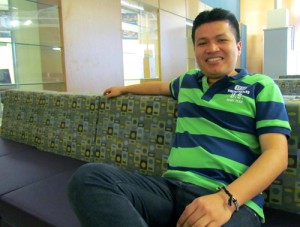 Erickson Madjer Da Costa Mendes served as one of nine alderman in Amazon, a state located in Brazil, before enrolling in University of Michigan-Dearborn's College of Engineering and Computer Science.

Erickson Madjer Da Costa Mendes is not your typical politician.

His 10-syllable name doesn’t necessarily roll off your tongue.

And at 19, he began campaigning for office three months before an election.

But Mendes had a trait that separated him from his opponents—he listened.

His ability to listen to voters and take action earned Mendes a four-year term as alderman in Amazon, a state located in Brazil.

“My friend, who I was running against, told me he won by two votes,” Mendes said. “But they recounted the ballots and I won by 18 votes. It was a close race, which made it really exciting.”

Mendes was one of nine aldermen to represent Amazon, which boasts a population of about 10,000.

With aspirations to accelerate his political career, Mendes exited the Brazilian political scene in 2013 and traveled thousands of miles to Dearborn to study industrial and systems engineering.

Now 26, Mendes is focused on his studies at University of Michigan-Dearborn. The international experience and fluency in English is sure to benefit Mendes when he returns to Brazil next year.

Upon his return, Mendes plans to land an engineering gig working on motorcycles and again pursue political office. Though this time around, he hopes to set his sights on the mayoral election.

“There are not a whole lot of streets in my city,” Mendes said. “Instead, there are a lot of trees and rivers, which makes for a rich fishing industry. Knowing how to speak English will help me communicate with European business partners about our fishing industry.”

Mendes knew little English before he arrived at UM-Dearborn, but he broke through the language barrier by enrolling in the university’s English Language Proficiency Program (ELPP). Through a series of intensive courses in reading, writing and speaking English, Mendes quickly overcame his conversational woes.

“Erickson has been an excellent addition to our university community,” said ELPP Coordinator Scott Riggs. “He offers a unique international perspective with which our domestic students have now had an opportunity to interact. He has made amazing strides in his English and we are excited about watching the impact he will have in Amazon. When he returns, he will take with him newly gained global understandings, an enhanced engineering skillset and the support of many in Dearborn.”