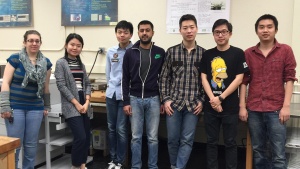 Assistant Professor Mengqi Wang’s goal for her first year as the campus’ Institute of Electrical and Electronics Engineers (IEEE) adviser was to match the success of her predecessor.

“Dr. Chris Mi was a very good coach and I learned so much from him,” said Wang, who assisted the team previously. “I want to keep the level of success that the students and the university have come to know.”

So Wang was pleased when she was notified that her IEEE students qualified for the 2016 International Future Energy Challenge semi-finals, just like the 2015 team that placed third.  IFEC is an international student competition for innovation, conservation and effective use of electrical energy.

And she’s hoping that the 2016 team will go even further.

Wang and her students are competing against universities around the world this week at the Applied Power Electronics Conference and Exhibition in Long Beach, Calif.

UM-Dearborn was one of only six IEEE teams from the United States. The finalists, who will be notified at the end of the month, will compete in Taiwan this summer.

“I am so proud of them. They are competing with very strong teams from around the world,” said Wang, noting that the students have been working on their project since September. “They have worked so hard and now we have an opportunity to demonstrate to the judges what they have done.”

The 2016 project was to build an ultra-high power density AC-DC converter. Wang said it’s a good topic because power electronics are one of the most essential areas in industry and in everyday life.

“Any place that needs power supply, power conditioning or power conversion would require power electronics technology,” Wang said. “Having students work on an actual project and develop a hardware prototype would greatly help them understand power electronics principles, apply the technology and enhance their hands-on capabilities, which will all benefit their future careers.”

And that’s why senior Changing You signed up to join the team—the aspiring engineer said he liked the challenge and experience gained from doing hands-on work.

“You get to put what you’ve learned from the book into practice. When you do it yourself, you can decide if it is an efficient or realistic design,” You said, sharing that they have developed a 3-D model they are presenting at the semi-finals.

The teamwork element has been another important part of the learning process for You.

“We’ve spent so much time together, and almost all of spring break—the only time we’d leave the lab was to eat and sleep,” he said with a laugh. “It’s important to know how to be part of a team. We didn’t know each other when we started this project, but we’ve all learned how to work well together.”

Wang said she’s watched her team’s progress over the past six months. And she’s enjoyed her first year at the helm.

“I want to help students get their hands wet and work on real things. It’s part of my service to lead and guide them with projects like this,” she said. “Their accomplishments have made me very proud.”