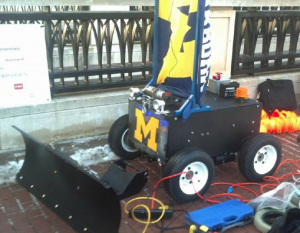 Fourteen inches of snow last Sunday. Another couple inches Thursday. And more in the extended forecast.

After bundling up and stepping outside, you wonder how you’re going to shovel your way out again. What if there was something that could do it for you?

Team Zenith 2.0 earned first place—along with $7,000 and the Golden Snow Globe Award—following a series of snow-removal tasks and a business pitch. The team used a regular webcam mounted on top of the robot to navigate the snow fields, creating paths by plowing through the snow.

Sophomore Ryan Sheen, executive of logistics for ISC, explained how the technology worked. “The vehicles run on a laptop, which acts as the brain. There’s programming that runs our written code to interpret what the camera sees. When it sees an object in its path, it will follow a pre-programmed response to turn to avoid objects.”

Team Yeti 5.0 earned a $4,000 prize for its second place finish. Team Yeti has competed at the event since it began five years ago and uses LIDAR, a laser sensor that bounces over surfaces and sends messages back to the vehicle so it can avoid obstacles.

In the future, Jason Spurlock, robotics engineer and ISC vice president, hopes to see improvements and design changes for the vehicles. “From year to year, we’ve been working to develop more effective, more reliable, and less expensive models. This year we’ve made significant progress, and we already have big plans for next year,” he said.

For ISC members, this starts with integrating new technology. The vehicles are handmade, computer designed, and printed on campus with a 3D printer, allowing the team to create custom plastic parts that work best for the vehicles while lowering costs and saving time.

“With the 3D printer we can engineer a part in CAD software and within a day be able to turn that part from dream to reality,” Spurlock said. “This technology enables us to build components for our robots quickly, cheaply and to our exact specifications.”

Autonomous snowplows have been gaining national attention lately, thanks to heavy snowstorms across the country. But when the snow melts, autonomous vehicular technology can have other helpful applications, such as militarized vehicles, and even emergency medical response vehicles.

“No one likes to shovel snow. I can see quite easily a couple years in the future, autonomous snowplows could take off in the future, for municipality use,” Sheen said. “It’s a test bed for the technology. The snowplow is an execution that makes sense so we’re able to use them and there’s some logic behind having them, but really we’re making something that drives itself.”

The Intelligent Systems Club is an innovative club giving students the opportunity to apply what they learn in the classroom to the real world. A list of ISC members and competition participants are listed below. For more information on the club, please visit isc.umd.umich.edu.