With dangerous driver-cyclist interactions on the rise, Feng’s work is laying the groundwork for safer streets. 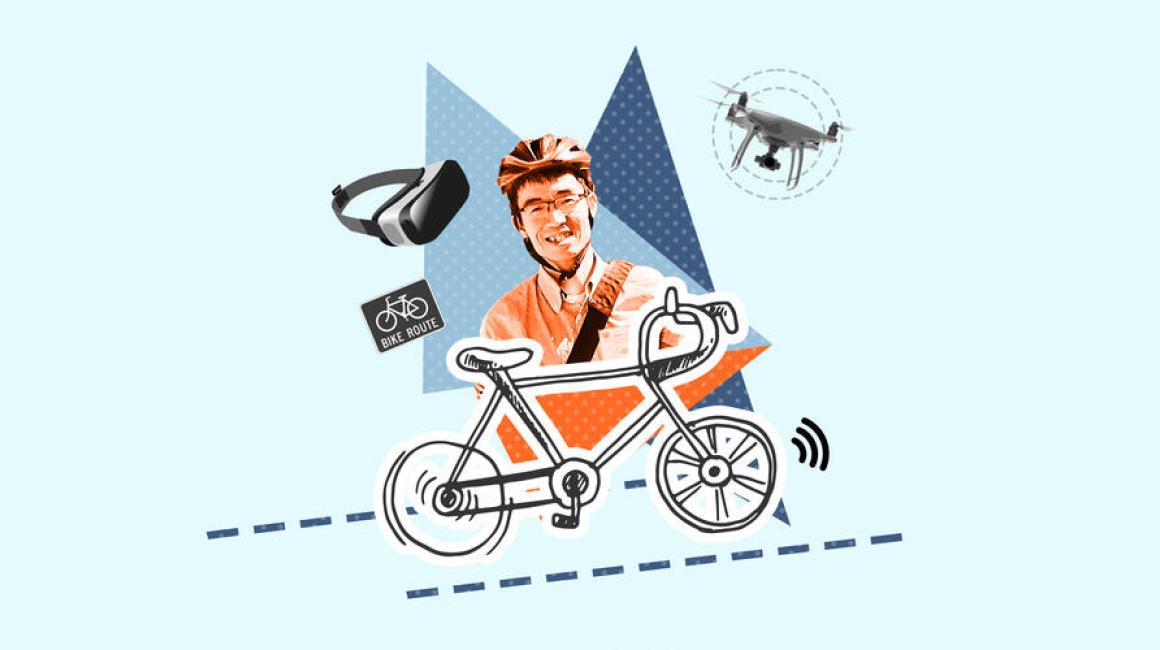 A collage graphic showing Assistant Professor Fred Feng wearing a bike helmet, surrounded by illustrations of a bike, a drone, road signs, and a VR headset.

We’ve had the opportunity to chat with Assistant Professor Fred Feng about his active mobility research a few times this past year, and his work always makes for an interesting conversation. In his lab, he has all kinds of fun tools, like a lidar-equipped bike that can map the distances between drivers and cyclists in 360-degree detail. And in his virtual reality cycling simulator, Feng can observe how cyclists might respond to a wide range of road scenarios, which helps researchers dream up safer road designs and new safety technologies. Apparently the National Science Foundation thinks Feng’s work is pretty interesting too. Earlier this month, he was awarded a five-year, $549,037 NSF CAREER Award to develop a multi-modal suite of technologies and analytical tools for studying bicycle safety.

For being such an everyday phenomenon, the shared use of streets by drivers, cyclists and pedestrians is still an emerging area of focus for researchers, and in particular, Feng says there are a lot of gaps in our understanding of how drivers and cyclists interact in the context of real-world road environments. One of the things that makes Feng’s new project so valuable is just how many ways he’s planning to approach that particular problem. One arm of the project will focus on direct observations of drivers and cyclists on real roads. To do this, he’ll be equipping vehicles and bicycles with a suite of cameras and sensors, including his bike-mounted lidar system, to record detailed information of real interactions from both points of view. In a new twist, he’ll also be analyzing “third party” observations from aerial drones. With a little help from AI, he can automatically comb hours of video footage for the kinds of driver-cyclist interactions that he’s particularly interested in studying.

This collection of naturalistic data can be especially informative because it captures real behaviors of drivers and cyclists in actual road situations. But the approach has some limitations. For one, the moments where drivers and cyclists are interacting can amount to a few needles in a vast haystack of footage. Feng says you could easily record hundreds of hours of data and still not encounter all that many of the specific road scenarios that he’d like to closely examine. So to fill in these gaps, he’s leveraging a second research modality. Using his virtual reality driving and cycling simulators, he can present study participants with basically any scenario he wants and observe how they react. This will be particularly useful for dangerous situations, which you obviously wouldn’t want to manufacture in the physical world with human participants for the sake of an experiment.

Two other research modalities complete even more of the picture. First, Feng plans to analyze thousands of records of state and national cyclist-vehicle crash data. And then to synthesize the findings from all three data sets, he’ll build computational models and simulations. By creating data-driven models of real-world road environments, he can then tweak different variables, like lane widths and road speed, to anticipate how these things might impact safety. Feng says this can be a cost effective way to test-run new road design concepts, which otherwise would have to be built and then tested in the real world.

His work promises to yield all kinds of new discoveries about the ways cyclists and drivers interact. But just as important, he hopes his suite of technological and analytical tools can help other researchers. For example, his team will be making their lidar-based point cloud dataset available to the public, so that other researchers and product developers can use it to tackle their own active transportation questions. “In terms of research on active transportation, there are still a lot of research questions that have not been answered yet,” Feng says. “So we hope this wide variety of research methodologies and complementary perspectives and technologies that we’re developing can help others answer other research questions — even questions we haven’t thought of yet. “

One of the unique things about CAREER Awards is the NSF expects faculty to engage not only in their core research work, but also educational outreach. On this front, Feng has a list of objectives that’s just as rich, including bringing his virtual reality simulator to K-12 classrooms, helping teachers incorporate VR and data science in their classroom curriculums, and supporting student-led safe driving campaigns in the state of Michigan. Of course, there will also be lots of opportunities for UM-Dearborn undergraduate and graduate students to work on Feng’s team, and he’s hopeful the project will attract students from underserved communities, where transportation equity issues are felt most acutely.

“I truly believe cycling is a way to make our community healthier, and make our cities more sustainable, livable, and equitable,” Feng says. “Compared to the cost of vehicle ownership, cycling is just much more affordable and can offer many people more effective access to their destinations. So if we can make it safer and more accessible for all groups, it’s a win for the entire community.”

Did you know this is the second NSF CAREER Award for UM-Dearborn engineering faculty in the past year? To learn about the other, check out our story on Assistant Professor DeLean Tolbert Smith’s effort to support Black students in the earliest stages of their STEM journeys. And to read more about Feng's research, check out his website. Story by Lou Blouin